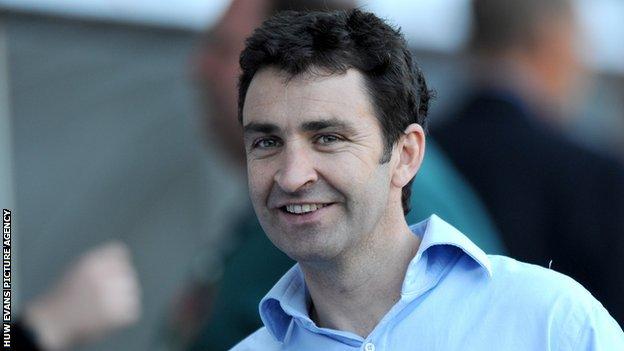 Ospreys boss Andrew Hore has called for players leaving Wales to forfeit the right to play for the national team.

A host of players have left Welsh teams and more could follow, including Cardiff Blues wing Alex Cuthbert.

He hopes the £3.5m salary cap imposed in Wales from next season could rise in future, but also admits it could fall.

Paul James is set to become the latest international to leave the Ospreys by joining Bath on a two-year contract.

At the end of the 2010-11 season, Hore's region bade farewell to Mike Phillips (Bayonne), James Hook (Perpignan) and Lee Byrne (Clermont Auvergne), having already seen Gavin Henson depart, initially for Saracens amid a bid to shed their "Galacticos" label.

Hore believes a compromise could be found if players were allowed to play outside Wales on the sort of sabbatical that took All Blacks fly-half Dan Carter to Perpignan during 2008-09.

"That would be positive for the game, unless, as some nations are now doing, they can apply for a sabbatical type period, where it might be beneficial for them because as I say, you've got to leave a certain amount of flexibility," said Hore.

In a wide-ranging interview with BBC Sport Wales, Hore admitted the Ospreys, who face Munster in the Pro12 play-off semi-finals on Friday, could lose more star players at the end of next season.

He said he "can't promise" other players will not follow the already departed at the end of the 2012-13 season as more players come out of contract, admitting the region might need to cull the squad "to survive".

The chief operations officer added: "In the past decisions were made on emotion, not on fact and the fact comes down to the balance sheet.

"And so, would we like to [keep players]? Yes, definitely. Some of those people that have left, like Huw Bennett for example, we don't want to see people like that going."

The Ospreys say they will continue to ensure players make regular club and community visits to help boost interest in the team.

They have also launched what has so far proved to be a successful season-ticket campaign ahead of next season with a buy-one-get-one-free offer being enthusiastically received.

However, unless the initial commercial boost is sustained, Hore says the Ospreys - along with their counterparts at the Blues, Scarlets and Newport Gwent Dragons - could be forced to re-assess the salary cap.

Amid the debate into the future of Wales' four regions, Hore believes a restructured global season would solve many of the game's ills.

In Europe he would like to see competitions played in "blocks" - as happens in the southern hemisphere - with the major Test tournaments being held simultaneously around the world.

He believes fans would be more likely to "buy-in" to such a concept and that players would enjoy a less demanding profession.

Under such a system, players would be paid by whichever organisation they were involved with during the given "blocks".

"The likelihood is too, you'd share the financial burden," said Hore,.

"I think we're trying to make things more complicated than it actually is."

Ospreys face Munster at the Liberty Stadium in Swansea on Friday night in the Pro12 play-offs (live on BBC Two Wales).