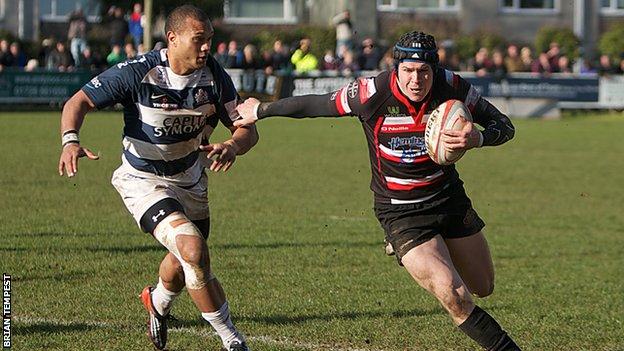 Cornish Pirates plundered five second-half tries at the Mennaye Field to leave Bristol's hopes of promotion to the Premiership in tatters.

Tries from James Merriman and Will Helu had carved out a 17-3 Championship semi-final first-leg lead for Bristol.

But, after three first-half penalties, Rob Cook went over early in the second half to convert his own try.

And the home side then added four more from prop Carl Rimmer (2) and wingers David Doherty and Grant Pointer.

Helu added his second try for Bristol early in the second period as the lead exchanged hands but, after Rimmer's try had put the Pirates back in front, the visitors had no answer to a nightmare blitz of three home tries in the final 10 minutes.

Pirates already know they are unable to get promoted, as their ground does not fit Premiership criteria - as is the case with Bedford, one of the other semi-finalists.

Bristol, who had previously lost just five games all season to finish top of the table, now have an uphill battle to turn this round at the Memorial Ground in next Sunday's second leg (13 May, 1245 BST).

Merriman drew first blood for Bristol after seven minutes, the flanker picking up after hooker Dave Ward's line-out throw went too long, to skip in under the posts.

Cook reduced the arrears with a penalty but Bristol, one of only two teams who have applied for promotion to the Premiership, restored their 14-point cushion when Jones slotted a 38-metre penalty.

Two more Cook penalties made it 17-9 to the visitors at the break. But the Pirates piled on the pressure from the start of the second half and it told after eight minutes when Cook latched onto a pass out wide, skipped past a couple of defenders and glided over before converting his own score.

Cook kicked his fourth penalty to put the Pirates ahead for the first time, 19-17, only for Bristol to quickly go back in front when scrum-half Tipuna Te Ruki fed Helu, who went over unchallenged by the posts.

Jones added the extras for a 24-19 lead, only for Rimmer to then force his way over the line to tie the scores.

But Cook's conversion put the Pirates back in front and, from then on, there was no stopping them.

After Ian Nimmo had plucked a line-out ball out of the air, hooker Ward popped up to offload to Doherty, who went in at the corner.

Cook's touchline conversion, which took him to 1,000 points from his three-year Pirates career, put Pirates 33-24 in front. And Grant Pointer then easily broke a tackle on the right wing to score with five minutes left, Cook making it eight kicks from eight.

And the Bristol capitulation was complete when Rimmer went over in a stoppage time maul after a great line-out take from Laurie McGlone, Cook for once missing the conversion.

"I don't want to get too carried away. We've still got a lot of hard work to do and we know that the Memorial Ground is a hard place to go.

"We've just got to stay focused and concentrate on the task at hand, but we're absolutely thrilled with victory.

"I don't want to be arrogant and I don't want us to get ahead of ourselves, but I think we've given ourselves the best opportunity we can to go up to the Memorial Ground and ensure that we can get into the final.

"I'm sure Newcastle are pretty happy with the result today but I'm sure they'll be watching next Sunday very closely, as the job's not done yet."

"It's a mountain to climb there. It's probably an Everest, but we've got to keep our spirits high.

"It's obviously very disappointing. We just didn't really get going today and were punished for it. At this ground, you've really got to be on top of your game and I don't think we really got to the top of it.

"We got two tries but I don't think we started particularly well, and maybe it led to what happened in the rest of the game.