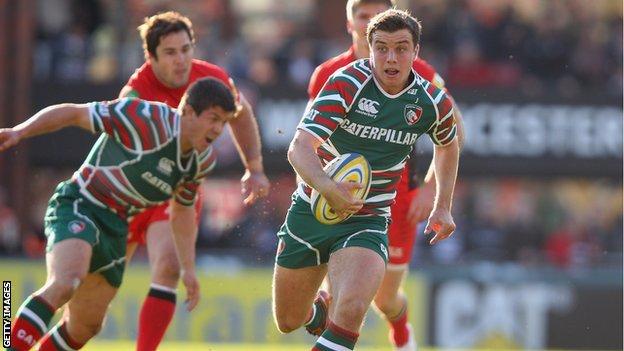 Alesana Tuilagi's well-worked try proved the difference between the teams in a ferocious and frantic first half.

But Ford, who had only started five Premiership games this term, assured Leicester of another Twickenham date.

The 19-year-old was one of two late changes to the publicised Tigers starting side, coming in for the injured toby Flood, while Craig Newby replaced Julian Salvi at open-side.

Both players made huge contributions, with Ford impressing with his handling and invention, while Newby was outstanding at the breakdown, turning over plenty of Saracens ball.

The opening stanzas were fast and furious and the action stopped only for Farrell to stroke over a penalty from halfway.

Tigers took the game to their hosts early on but the Premiership champions met their opponents with some savage hits.

Ford settled his nerves with a simple penalty in front of the posts on 10 minutes but David Strettle was a fingernail away from scoring two minutes later after Sarries' smart offloading exposed Leicester's defence down the short side.

The England wing evaded Alesana Tuilagi's desperate tackle and skilfully avoided touch only to lose control of the ball in grounding.

Saracens, who were bidding for a third straight final appearance, got their rewards for sustained pressure when Farrell doubled his tally from the tee with a quarter of the game gone.

But within minutes of the restart Alesana Tuilagi, in his final game at Welford Road, finished a training-ground move when he came off his wing to burst through a hole in Farrell's midfield channel.

Ford converted but the men in red were unbowed and pushed back into Tigers territory.

"Leicester will be concerned with how they played when they tried to take the game beyond two or three phases. Little unforced errors stopped them from going from satisfactory to very good. George Ford's kicking was good but I think they will need to improve the link between the half-backs for the final because Saracens managed to disrupt the link between Ben Youngs and Ford. But the Tigers' defence in the second half was very good, Craig Newby turned over a lot of ball which stopped Sarries playing, and they will feel they can improve on this performance quite markedly, which is a good position to be in ahead of the final. "

Their foray earned a third place kick for Farrell, who made it a one-point game at 10-9 but he sent his next chance wide.

Geordan Murphy handed the England man a chance to make amends soon after when he flew into a ruck off his feet.

Farrell converted but Ford regained the lead from 45m to take the hosts into the break 13-12 ahead.

Referee Dave Pearson was stringent at the breakdown and with two minutes of the second half gone Sarries were penalised for not releasing the tackled player.

Ford's penalty attempt was ugly but he produced a game-changing break that sent Tigers into the 22 before they switched play and Newby's superb offload fed Murphy who found Mafi on the left wing.

The teenage fly-half, the current IRB young player of the year, was managing the game like a veteran but his conversion attempt was seriously wayward.

Newby won his side a penalty on 52 minutes and Ford held his nerve to give the East Midlanders a nine-point lead.

The Londoners struck back through Farrell to make it 21-15 after resolute Tigers defending held out a dangerous seven-phase attack and Ford released a 60m touchfinder to clear his lines.

Tigers mauled Sarries back over their own line but were held up and when the hosts opted to go for a 5m scrum rather than the posts, after a series of resets, Sarries won a penalty to release the pressure.

Ford opted for the posts from halfway but the ball cannoned back off the crossbar to keep it a six-point game with less than 10 minutes left.

But he added a fourth penalty of the afternoon in the closing stages to make it a nine-point winning margin and leave Tigers on course for a 10th English title.

"Obviously there still a game to go and win but I'm really pleased we've proved a lot of people wrong that were taking pleasure in us struggling at the start of the year.

"Newbs [Craig Newby] has had a lot of injury this year but he knows the game. He doesn't train much during the week but on Saturdays he knows what to do - I thought he was outstanding.

"Fordy, to play how he did on a big occasion was really good. I'm just delighted for the players because we've had a lot of stuff thrown at us."

"It was one of those very tight games. Leicester are a top-class side, and while we had some opportunities, we did not take them.

"When you come to Welford Road you have got to take all your chances, but I was proud of the players' efforts. I think we have had a good season."