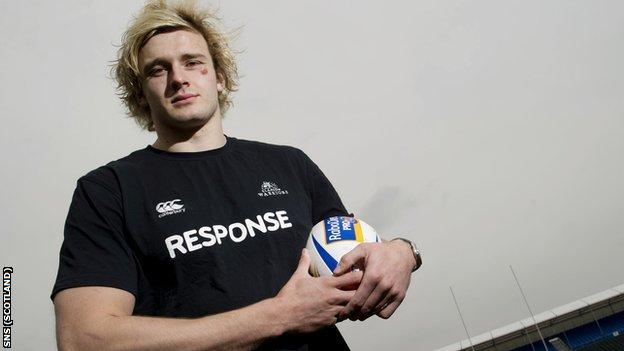 Glasgow and Scotland lock Richie Gray is determined that he and his fellow Warriors will do their utmost to reach the RaboDirect Pro12 final.

Sean Lineen's side's fourth-place league finish has produced a semi-final against Leinster in Dublin on Saturday.

"We go in as underdogs but we have nothing to lose so we will throw everything at them and strive to make the final," said the 22-year-old.

"It doesn't come much harder but it is a do-able task."

Gray is well aware that Leinster finished top of the Pro12 league but believes Glasgow should head to Ireland with hope.

The Sale-bound forward said: "They are the best team in Europe. They are the current European champions and they are in another final so they are consistently very good.

"I think we'll be buoyed by the fact that we went over there earlier in the season and won at the RDS.

"I'm sure the guys will take confidence from that.

"We know how tough it will be but we are very confident and we will have a good crack at it.

"We are strong in a lot of departments and we have learned a lot about playing the Heineken Cup."

A raft of other players will leave the Glasgow team at the end of the season, including Federico Aramburu and number eight Johnnie Beattie, as well as coach Sean Lineen, who will begin a new role with Scottish Rugby.

Gray added: "With people moving on, you want to give these guys something to leave with and a title would be brilliant.

"I want to play as many games in a Glasgow shirt as I can before the end of the season. A win would mean another game.

"The club has given me a huge amount. I have met some great friends and the fans have been fantastic.

"I do owe them a lot and I thank them for everything."

With Edinburgh's terrific run in the Heineken Cup this season and Glasgow performing well in the league, Gray hopes the Scotland team can be the beneficiary when they face Australia, Fiji and Samoa.

"The club sides have been performing very well and that can only be positive for the national team," he said.

"Most of the guys in the national team come from the club environment.

"For Edinburgh and Glasgow to start winning, hopefully the momentum will go into the national team and we will have a good summer tour."