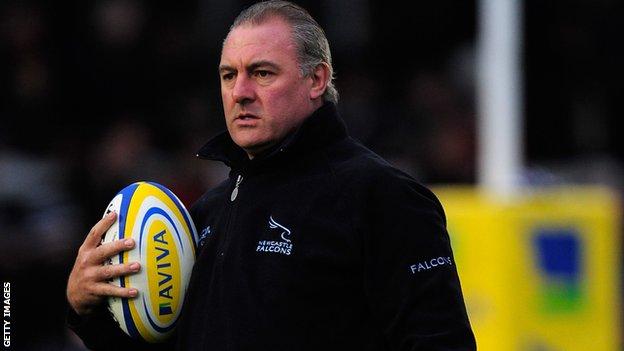 Bath have appointed Gary Gold as their new head coach.

South African Gold, 44, replaces Sir Ian McGeechan, who leaves the Rec after only one season in charge.

"It's a well-known fact that it is the heartbeat of rugby in the UK," Gold told BBC Radio Bristol. "I'm really excited about the adventure."

Last month, McGeechan announced his intention to quit after a disappointing campaign in which Bath finished the season eighth in the table and failed to progress past the group stage of the Heineken Cup.

"I really want to put Bath rugby back on the map," continued Gold.

"They've been an outstanding team for a number of years and by their own admission they've fallen short at the last hurdle.

"I realise the level of responsibility is huge and the height of expectation but it's an incredibly exciting challenge that I'm very much looking forward to it."

Gold gained Premiership experience during a three-season stint with London Irish before joining Super Rugby franchise the Stormers, and then filling in as head coach at Western Province.

He went on to spend four years as forwards specialist with South Africa under head coach Peter de Villiers.

Gold returned to England in January as Newcastle Falcons director of rugby for the remainder of the season, replacing Alan Tait.

For all the undoubted quality that is arriving at Bath it's the balance of the coaching set up that is the real issue.

Gary Gold, Toby Booth and Neil Hatley are all forward-orientated and will no doubt get to work on an under-performing pack.

But Brad Davis and Mike Ford are both defence coaches and given that scoring tries has been one of Bath's biggest problems this season, it's surprising that not one of the four newcomers has that specialisation amongst the backs.

It looks like that responsibility will now fall on the shoulders of Davis.

Although he failed to stop them finishing bottom of the Premiership, he impressed during his short spell at Kingston Park after they whittled down a nine-point deficit at the foot of the table to only one.

Ford follows Gold to the Rec, having worked together at the Falcons, while Booth leaves London Irish after 10 years with the club.

Booth's future at the Madejski Stadium had been in doubt since they re-signed Brian Smith as their director of rugby.

With Hatley also jumping ship to Bath and Mike Catt's decision to join the England set-up, it means the Exiles must now rebuild their coaching team for next term.

Booth said in a statement: "After 10 years London Irish will always be part of me and the decision to leave was not taken lightly especially after the fantastic support shown to me by the fans throughout my time here.

"Moving is going to be a big change but I feel now is the right time for a fresh challenge. I have worked with fantastic players and coaches over the years and I would also like to thank everyone who has supported me."