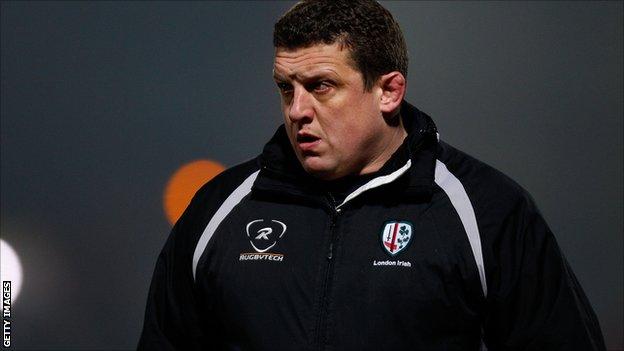 Former London Irish star Peter Richards says Toby Booth's departure from the Exiles to Bath as forwards coach should come as "no surprise".

The 42-year-old's departure was confirmed on Tuesday, following a 10-year spell with Irish.

In March, Richards said Brian Smith's return to the club as director of rugby was a "kick in the shins" for Booth."

"When Brian came in to take over there was always going to be movement below him," Richards told BBC Berkshire.

Scrum-half Richards, who won 13 caps with England, added: "So, no I don't think it is a surprise."

"From the moment Brian Smith was unveiled as the returning director of rugby, Toby Booth's future at London Irish was uncertain. The official line, that Booth was happy with the move - even that it was his initiative, was never entirely convincing.

"And over the subsequent weeks, as his coaching staff was disassembled and new players brought in, his departure looked inevitable when the right job came up."

Following his departure, Booth became head coach as the club reached a Premiership final and also qualified for the Heineken Cup over three successive years.

However this season has been difficult with the announcement of the departure of several senior players in the summer, as well as missing out on Heineken Cup qualification.

Earlier in May it was also announced that attack coach Mike Catt would be leaving to join the England set-up.

"They are not the first club to be changing their coaching staff with Sale, Gloucester and Bath obviously themselves changing management," added Richards.

Richards now believes Smith will take a more involved role with the club but still feels they will bring in a new head coach.

"Brian Smith is a shrewd operator and I'm sure he will take on some sort of hands on role in coaching the backs," he said.

"There has been a lot of movement not just at London Irish this year and it will be interesting to see who gets the job.

"Brian told me he would like to wear a track-suit three days a week and a suit for two days and he's still got obligations off the field in terms of contract negotiations.

"But I think he certainly likes to get his hands dirty but not as a head coach as it is too much responsibility for one man."