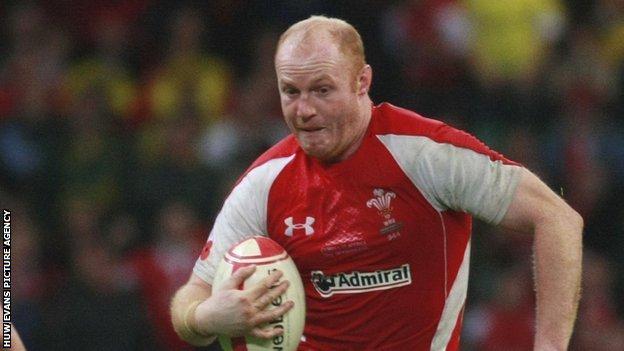 Martyn Williams is set to make his 100th Wales appearance in the capped game against the Barbarians on 2 June.

The open-side, 36, ended his domestic career in Cardiff Blues' 38-13 win over Edinburgh and said he will retire from playing at the end of the season.

It had seemed that Williams would be left stranded on 99 caps, but will now be seen one last time in a Wales shirt.

"It was a difficult decision based on rugby decisions, not sentiment," said Wales caretaker coach Rob Howley.

Wales captain Sam Warburton will not feature against the Baa-Baas as he finishes his rehabilitation from injury, but the open-side is expected to be fit for Wales' opening Test of three against Australia on 9 June.

It is likely that Warburton and open-side Justin Tipuric will be part of a 15-strong 'advance guard' to Australia that will not play against the Barbarians at Cardiff's Millennium Stadium.

The likelihood is that Scarlets' Aaron Shingler, who made an impressive Wales debut in the Six Nations against Scotland, will start at seven, with Williams on the bench.

"Sam hasn't played much rugby since the French game [where Wales clinched the Grand Slam in Cardiff], Sam's captain credentials are important to the squad and we want to look after players and give new players an opportunity," Howley added.

"I'm delighted to give Martyn that opportunity to gain that 100th cap, but the one thing in life is that nothing is given out for nothing and he'll certainly prepare for that game as if it was his first cap."

Williams, 36, retired from international rugby following the 2007 World Cup, only to be persuaded to return by Wales coach Warren Gatland.

It seemed he would be left stranded on 99 caps, despite a campaign by fans to allow him to run out for a century of Tests for his country.

But Williams will now get to that century mark under Howley - taking charge because of Gatland's injury.

Howley said the likes of Shingler, Scarlets team-mate Ken Owens at hooker and Ospreys scrum-half Rhys Webb will also figure against the Baa-Baas.

Injuries to Jamie Roberts, Jon Davies and Scott Williams means that Wales will also have to shuffle their options at centre.

Ashley Beck is tipped to start after his impressive season for an Ospreys side that has qualified for the RaboDirect Pro12 play-offs.

There is also a "possibility" according to Howley that George North could be switched to centre for Wales.

The 6ft 4in, 17st flier has won all 21 of his caps on the wing, scoring 10 tries, but has been tipped for a possible move to midfield at some point in the 20-year-old's career.

Howley will name a 38 or 39-man training squad next Monday, with that whittled down to a likely 34-man squad to tour Australia.