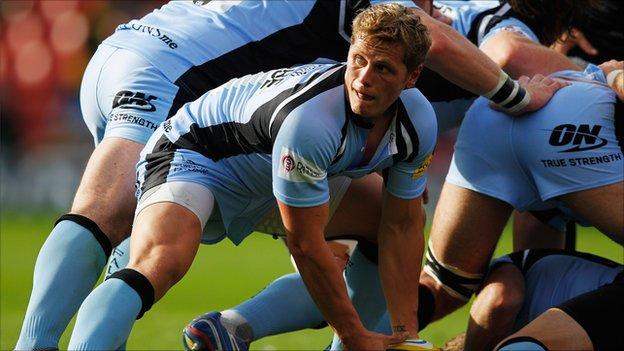 Newcastle Falcons have handed half-back Chris Pilgrim an undisclosed extension to his deal at Kingston Park.

The 26-year-old joined the Falcons from Nottingham in August 2009 and has made 42 appearances, 16 of which came in the club's 2011-12 Premiership campaign.

"I am delighted to have signed a new contract," the Birkenhead-born scrum-half said.

Whether Pilgrim and Richards will be part of a club in the Premiership or the Championship is still yet to be decided.

Despite finishing in the relegation place, only Bristol of the Championship play-off hopefuls have guaranteed facilities suitable for top-flight rugby, while London Welsh require further developments - and approval - before they can be eligible.

Regardless, Pilgrim follows in the footsteps of players such as Jimmy Gopperth, Scotland international Ally Hogg and captain Rob Vickers in committing to the club for next season.

"The fact that Dean Richards is coming in has had a massive bearing on my decision to stay in the North East and there is certainly a very bright future for the club," Pilgrim added.

"I want to be a part of something special here - now my aim is to get my head down and keep working hard in training."