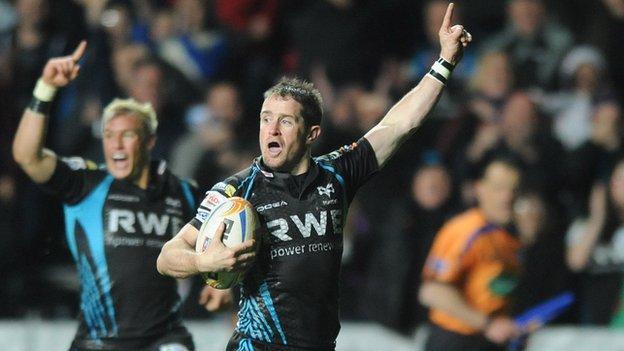 Shane Williams is set for his final home match for the Ospreys in the Pro12 play-off clash with Munster on Friday night.

The Lions wing did have a farewell match against the Dragons in April before the Ospreys earned a home tie in the final four.

Williams, 35, who scored a try in his 'farewell' against the Dragons, is likely to be preferred over Eli Walker.

"There was a big focus for the Dragons game and that was the only game we could guarantee [for Shane's farewell].

"Fortunate for us we have got the home semi-final so all likelihood Shane will play. It's a big occasion.

"Eli has done terrific for us. He's really developing but we see the big game experience from Shane on Friday night will be a real benefit to us.

"Eli is coming on and I'm sure he will be a great Osprey. Hanno [Dirksen] is getting better and better every game. It was key for us to develop these guys.

"We did feel it is the right time to give Eli a break and bring Shane in."

There is an outside chance Williams could have another home tie in the final but that depends on the Ospreys beating Munster and Glasgow overcoming Leinster in the other play-off.

Williams enjoyed his 'final' match on 20 April by score a last minute bonus point try as the Ospreys overcame the Dragons 31-12 in front of 14,478 at the Liberty.

As well as saying farewell to Williams, Paul James will be playing his last home game before moving to Bath next season.

And Tandy said he was sad to see the Wales prop leaving after starting his career with the Ospreys.

"We are always sad to see players go. Paul is an original Osprey. He is a great Osprey.," said Tandy.

"He is a good friend, a good team-mate [and] a great guy to coach. It is huge loss to the region as is Huw Bennett and Tom Smith, those type of guys."

The Ospreys have one slight doubt to their line-up against a Munster side they have beaten twice this season already in the Pro12.

Flanker Justin Tipuric did not feature in the 18-11 victory in Aironi because of a back spasm and he will be monitored this week.

If the Ospreys reach the final they will take on either Leinster or Glasgow on 26/27 May.