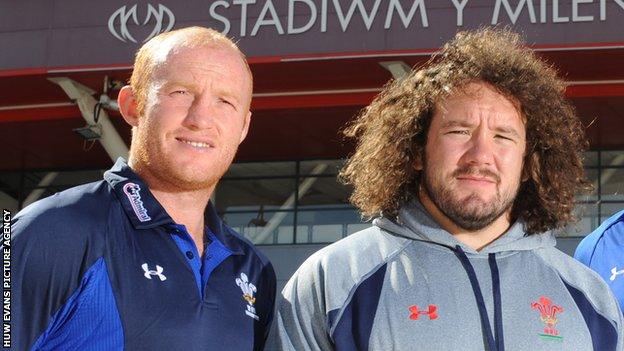 Prop Adam Jones says it is right Martyn Williams will receive his 100th Wales cap against the Barabarians on 2 June.

Williams expected to be stranded on 99 appearances until Wales caretaker coach Rob Howley said he would play a part against the Baa-Baas.

The open-side, 36, ended his domestic career in Cardiff Blues' 38-13 win over Edinburgh and said he will retire from playing at the end of the season.

"He deserves it. He's been around now for God knows how long," said Jones.

It's never nice to be stranded on 99

"I'm chuffed for him and I hope they get a good crowd there for him, playing against boys like Steve [Stephen Jones] and Shane Williams, friends of his. It will be a fitting end to his career.

"I certainly hope more turn up than came for Martyn and Gethin Jenkins's last game for the Blues against Edinburgh.

"I was disappointed how many people were there to compare it how Shane left for the first time."

And Jones' Ospreys and Wales colleague Ian Evans insists Williams deserves to have the accolade of receiving his 100th cap.

"And he has been a great representative of Welsh rugby."

Williams retired from international rugby following the 2007 World Cup, only to be persuaded to return by Wales coach Warren Gatland.

It seemed he would be left stranded on 99 caps, despite a campaign by fans to allow him to run out for a century of Tests for his country.

But Williams will now get to that century mark under Howley - taking charge because of Gatland's heel injury.