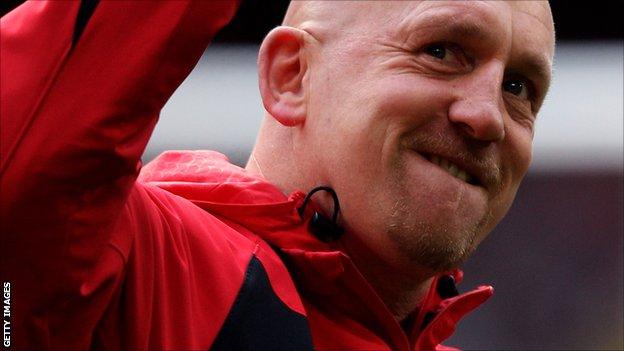 Edwards, defence coach for the Wales national team, will replace Toby Booth at the Exiles, but will continue his work with the Six Nations champions.

"He's a great asset for us and I'm personally excited about working with him," London Irish director of rugby Brian Smith told BBC Radio Berkshire.

The Exiles announced on Tuesday that Booth, Justin Bishop and Neal Hatley had left the coaching staff.

Edwards, 45, has not coached at club level since leaving London Wasps in November 2011 and his capture is a great coup for the club, who finished seventh in this season's Premiership.

The former rugby league star will start work after the Wales tour to Australia. Smith also announced he will be stepping back up to a more hands on coaching role to run the team's attack while a new forwards coach is also set to be announced soon.

"From the moment Brian Smith was unveiled as the returning director of rugby, Toby Booth's future at London Irish was uncertain. The official line, that Booth was happy with the move - even that it was his initiative, was never entirely convincing.

"And over the subsequent weeks, as his coaching staff was disassembled and new players brought in, his departure looked inevitable when the right job came up."

"We've locked horns in the past and I've always found it to be a great challenge," added Smith.

"The hallmarks of his teams are that they are very disciplined and it's an area where we need to improve.

"Defences win titles and we think we are bringing in one of the best coaches of the modern era.

"Shaun brings great intensity to any contest. He did it as a player and he is doing it as a coach.

"The boys know there will be no place to hide at this club next season and I'm sure he will bring the best out in our players."

Meanwhile, Smith has dismissed the suggestion that his arrival at the club was responsible for Booth's departure to Bath.

Smith instead feels that Booth needed a fresh challenge after 10 years at the club, and his departure would have happened had he been there or not.

The Australian returned to the club in March to work above head coach Booth, something that former London Irish player Peter Richards called "a kick in the shin".

"I don't think my return has been the catalyst for Toby's move to Bath," Smith told BBC Radio Berkshire.

"It's been a ball that's been in play for some time.

Smith added that there had not been a falling out and Booth left with his blessing.

"The conversations I have had with Toby have been honest and heartfelt and never have we raised our voices at each other," he said.

"He is a fantastic coach and I genuinely believe he will go on to coach England in some capacity."