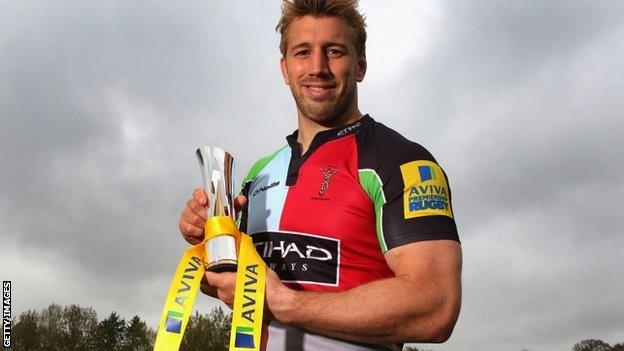 Harlequins captain Chris Robshaw has won the Premiership player of the season award despite missing more than a quarter of their games through England duty.

The 25-year-old led his country to second place in the Six Nations after missing last year's World Cup.

He managed 16 appearances for his club as they finished top of the table.

Leicester's Julian Salvi and Exeter's James Scaysbrook were also nominated for the award.

Robshaw's international team-mate Owen Farrell picked up the discovery of the season award after establishing himself as England fly-half while playing an important role in the Saracens backline.

Robshaw was one of the few players to emerge from the leaked review of England's dismal World Cup campaign with credit.

Praised for his attitude and performances before he was cut from Martin Johnson's final 30-man selection, the flanker assumed the captaincy in head coach Stuart Lancaster's new-look side and became the first England skipper to secure three away wins in the Six Nations.

Under his leadership, Quins finished top of the regular season standings to ensure home advantage in Saturday's play-off semi-final against Northampton.

"What I like about him is that no matter which accolades come his way or what he achieves, we all know what comes first with Chris is the team.

"Chris is the sort of guy who'll never get above himself. For him it is all about the team. He wants nothing more than for the team to be successful."