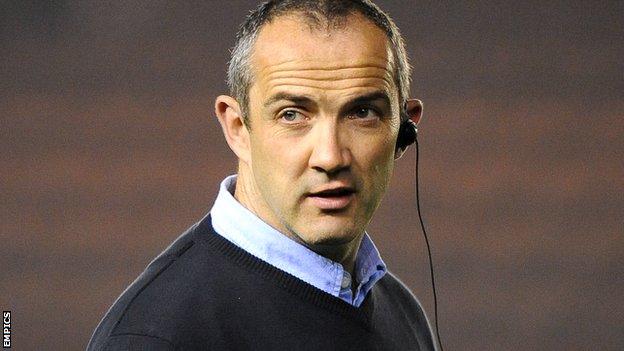 Harlequins director of rugby Conor O'Shea says the side must keep their focus despite finishing the season top of the Premiership table.

Quins welcome Northampton Saints to the Twickenham Stoop in their play-off semi-final on Saturday.

He told BBC London 94.9: "In the grand scheme of things, we have won nothing.

"We said after the game last weekend, enjoy it for 24 hours but forget about it. There are bigger fish to fry, starting this weekend."

O'Shea added: "Everyone at the club has put in a huge amount of work to get where we are.

"The business end of the season is what we're all involved in the game for. The players are incredibly ambitious, want to win silverware and want to write new chapters of history for the club.

"There is a realism that we've played a lot of big games and we'd love to get to the final at Twickenham so much."

In their two league meetings this season, Quins ran out 26-13 winners over Northampton at The Stoop in September but lost the reverse fixture 24-3 at Franklin's Gardens in January.

O'Shea is expecting a close game and has called on his side to take their opportunities when they arise.

"They're physical up front, have a great scrum and a massive maul," he continued.

"They've got game-breakers out wide and can play any which way they want. But that's what you expect at this time.

"We'll have to defend and keep our discipline when they have momentum and we are under pressure. When we create chances, we will have to finish them.

"We'll put our best performance on the pitch and see where it takes is."