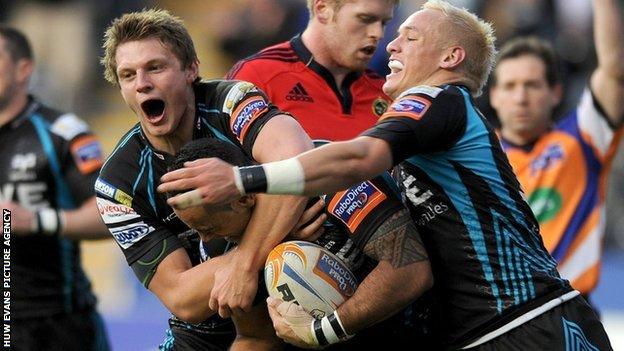 The Ospreys produced a brilliant display to beat Munster in a clinical Pro12 play-off semi-final win at the Liberty Stadium.

A final against Leinster, who beat Glasgow in the other semi-final, awaits the region on 26 or 27 May.

Ian Keatly scored a try, conversion and penalty for Munster.

The hosts ensured the tournament's play-off semi-final record of no team having won away at that stage remained intact.

In the process the Ospreys inflicted a rare, painful hammering on Munster while completing a season's Pro12 treble over the respected Irish province.

With chief Andrew Hore hoping the Ospreys win titles as well as hearts and minds, the hosts oozed confidence even after falling behind to an outstanding early Munster score.

Lifeimi Mafi's approach work created a midfield hole that Keith Earls expertly exploited to send Keatley over, the fly-half converting his own score.

Biggar knocked over his first penalty as the first response, then finished off a telling attack by completing a one-two with Ryan Jones, the latter's inside pass the highlight of the move.

Wales hopeful Biggar converted and put them back into the lead after Keatley levelled with a penalty.

And the Ospreys ended the opening period in memorable, long-range fashion as Richard Fussell's inside pass freed Joe Bearman for the number eight to send Fotuali'i over.

The Biggar conversion gave the Ospreys a 23-10 half-time lead, that he stretched with another penalty, taking his career tally with the team over the 1,000 mark before another outstanding home try.

Veteran wing Williams' popped pass put Bishop over for the next, Biggar converting.