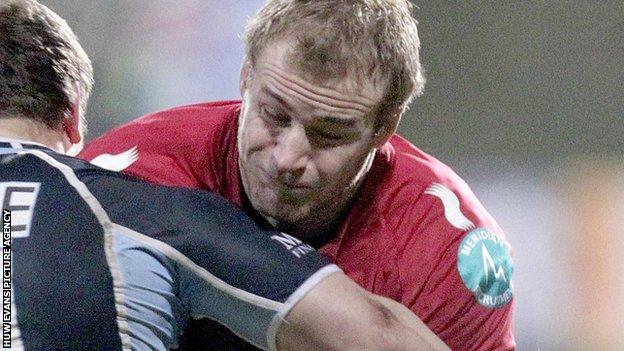 Welsh, 29, joined Scarlets from Cardiff Blues in 2009 and is the second new lock to move to the Chiefs.

Exeter signed and after and both announced they were quitting the sport.

Welch is the third lock to leave the Scarlets ahead of next season following Lou Reed (TBC) and Dominic Day (Bath).

"We've been looking at Damien for some time, I think it's the third time I've spoken to him." said boss Rob Baxter.

"Initially I had a good look at him before he started playing professional rugby at Cardiff but didn't quite think he was a fit for us at the time.

"I've kept an eye on him all along and when I found out quite recently the Scarlets were prepared to release him from the second year of his contract we got onto things very quickly. He came down, did his testing again and he really is a great athlete."

Welch made 18 appearances for Scarlets last season, including four starts in the Heineken Cup.

His departure leaves the Llanelli-based side with Tongan international Sione Timani and verstatile back-five forward Aaron Shingler plus another all-rounder in Josh Turnbull as lock options for next season.

However, both Shingler and Turnbull been capped in the back-row by Wales - the former at openside flanker during the 2012 Six Nations while the latter has won three caps off the bench.

Scarlets boss Nigel Davies has promised they will bring in new second-row forwards to cover the departures.

With Mumm possibly missing the start of the season because of international duty, Baxter was keen to strengthen his pack as his club embark on their first season of Heineken Cup rugby.

"The front five is a key area in the Premiership and probably even more so in the Heineken Cup," he commented.

"We feel we've got some real strength there. I look at our group of forwards we've got for next season now and I can't wait for the season to start, I think they can do some real damage next year."

And Baxter feels Welch has the talent to win international honours.

"He's operating at the level just below being selected at international level," added Baxter.

"We think he's better than some of the selection issues he's had at the Scarlets and we want to help him push on."