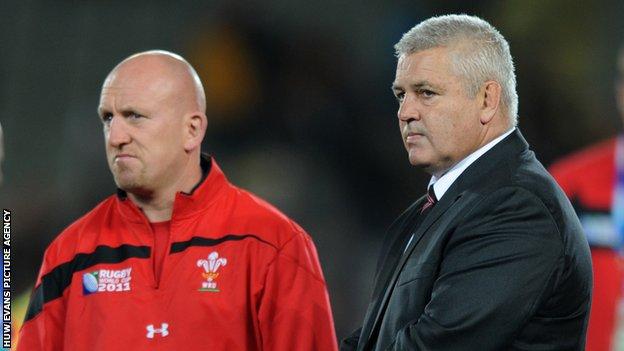 Wales coach Warren Gatland could yet make part of this summer's three-Test tour to Australia.

Defence coach Shaun Edwards hinted the New Zealander could recover in time from his heel injury to make the trip.

Gatland had been ruled out of the whole tour with two broken heels, with Rob Howley being made caretaker coach.

"I spoke to him the other day. Trudy his wife is monitoring the situation and we will see how he is closer to the time to be honest," said Edwards.

"The most important thing is that Warren gets better and is fit and healthy and is able to walk around."

But if Gatland, who had surgery to reconstruct his right heel after a fall at their New Zealand holiday home, was to have some input in the tour Edwards would welcome it.

"For me is the best coach in the world and you are going to miss someone of that experience," he insisted.

Wales begin their tour of Australia against the Wallabies on 9 June with the first Test in Brisbane and finish the trip a fortnight later on 23 June.

Edwards was talking after just being recruited as London Irish's defence coach on a one-day-a-week role next season.

But the former rugby league star insists the role will not affect his commitment to Wales, whom he has helped to two Grand Slams in five seasons.

"I'm happy about it. Wales is my main priority and always will be while I'm contracted to Wales," he said.

"But Roger Lewis [WRU group chief executive] allowed me to have a clause in my contract where I can have one day a week at a Premiership club.

"My job is to help sort the [London Irish] defence out. I want to win games of rugby - I'm quite a competitive person."