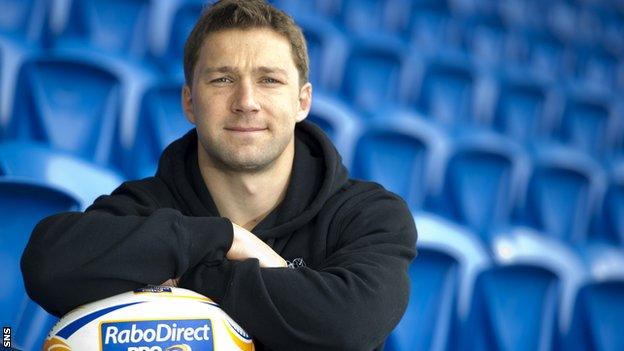 Chris Cusiter believes Glasgow Warriors can cause an upset against Leinster in Dublin on Saturday and reach the RaboDirect Pro12 final.

"Nobody really expects us to win but within our group there is confidence in what we can do," the experienced scrum-half told BBC Scotland.

"We've had a good run in the league and we know we can be a hard team to beat, if we get it right on the day.

"We've got a great team spirit and that's what can get us over the line."

Leinster topped the league standings, some 16 points ahead of fourth-placed Glasgow.

And the Dubliners hope to complete back-to-back Heineken Cup victories when they take on Ulster in the final on the following weekend.

But Sean Lineen's side have form against the hosts this season, having won 23-19 at the RDS in September and scrapping out a 10-10 draw at Firhill on league duty.

Leinster did get the upper hand in both Heineken Cup group matches this term, dishing out 38-13 and 23-16 triumphs.

"They taught us a bit of lesson in the first round of the Heineken Cup," concedes Cusiter.

"We've played them four times already this season and we're well aware of what they bring.

"In terms of consistency of performance, Leinster are right up there. Over the last few years they have been absolutely brilliant in the league and in the Heineken Cup.

"They are setting the benchmark in Europe."

Glasgow are taking part in the play-offs for the second time in three seasons and Cusiter knows he and his team-mates must be at their best to reach their first final.

"We're not going to reinvent the wheel over there.

"It's about sticking to our game plan, although it's hard to get the kind of quick ball we're after with the way they defend.

"The contact area and breakdown are always key and Leinster make it so hard to win the ball back.

"We've worked so hard to get to this stage and we don't want it to end this weekend."