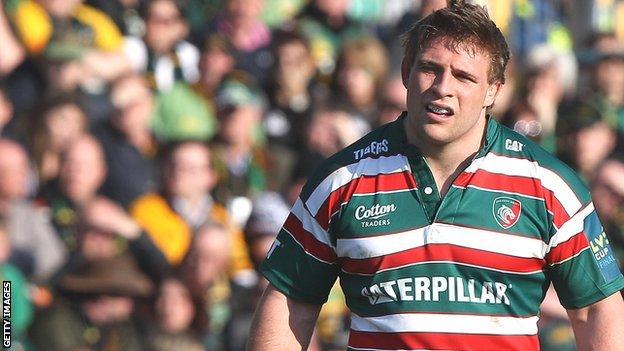 Leicester Tigers hooker Youngs, 25, has been named in England's 42-man squad for the tour of South Africa in May.

The thing with Tom is that he had always been a hooker, just one playing out of position

But just three years ago he took his first tentative steps as a forward with Nottingham, having already represented his country as a centre for the U20s.

"A lot of work went in to developing something special," Delaney said.

Having made his Premiership debut as a centre, and then featured for the England U20s, Leicester decided Young - the younger brother of England and Tigers scrum-half Ben - was more suited to the front row.

Delaney recalls the transition being a difficult one, but one that Youngs embraced.

"It was a time when we had the view to improve players because we were not in a financial situation that we could buy the completed article. And so we went about developing them," Delaney said.

"When Leicester asked if we would help Tom become a hooker, it was a great chance to become involved with him and a lot of work went in.

"The thing with Tom is that he had always been a hooker, just one playing out of position.

"He has now been a hooker for three years and done amazingly well and is ahead of where I thought he would be.

"It was tough for him when he came in to play hooker, but he had the mentality and physical attributes to play there. Fair play to the lad, now he's going on tour."

After two seasons with Nottingham in the Championship, Youngs returned to Welford Road.

And even though he has never started a Premiership match in that position, he has made 12 appearances for Leicester from the bench in a total of 14 appearances this season.

Delaney is confident he can make the step up.

He added: "Whenever Tom is out there on the field he would contribute in so many ways. Put him on the field at any time and he will do something for England."