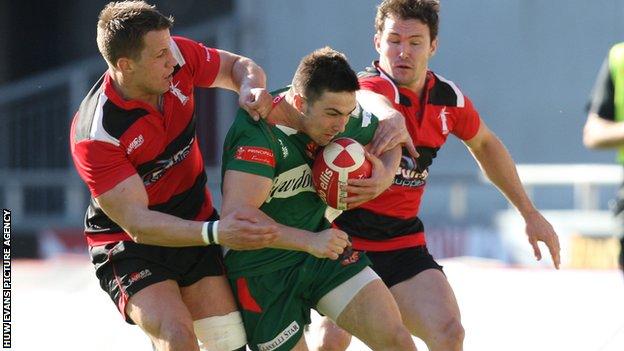 Aberavon fought back after trailing at the interval and led for a time during the second half with Morgan Allen and Neil White their try scorers.

Llanelli will now face Pontypridd, who finished the season top of the Premiership table, in Friday's final at Sardis Road.

The home side led 16-6 at the interval with full-back Williams scoring their points, including a try while Craig Evans contributed two penalties for the visitors.

Evans closed Llanelli's advantage to seven points with another successful penalty early in the second half before Allen's try and an Evans conversion brought them level.

And Evans' fourth penalty of the afternoon gave Aberavon the lead for the first time in the game on 55 minutes but within two minutes a Williams penalty brought Llanelli level.

And Dan Newtown sealed Llanelli's victory in the final minute with his side's fourth try which was converted by Williams.

There was time remaining for Aberavon to score the game's final try with replacement Neil White crossing before Evans converted but it was too late for the visitors.