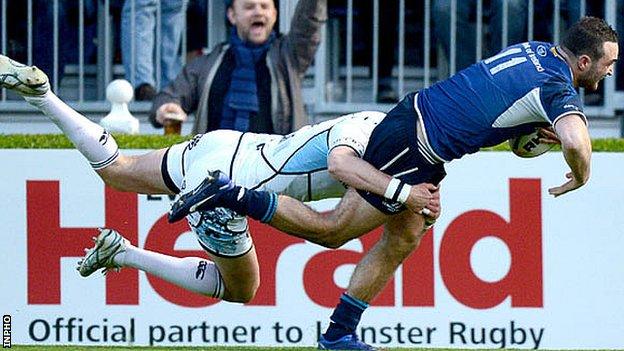 Leinster survived a late Glasgow rally to set up a RaboDirect Pro12 final meeting with Ospreys.

The home side were ahead at the interval as Jonathan Sexton kicked three penalties to Duncan Weir's one, with Glasgow's Alex Dunbar sin-binned.

Dave Kearney plunged over after good work from Isa Nacewa to give Leinster a commanding 19-3 lead.

Dougie Hall and Stuart Hogg hit back with tries in the final three minutes but time ran out for Glasgow.

Ruaridh Jackson's successful conversion was the final kick of the ball at the RDS Arena.

The closing stages of the game were thrilling as the visitors threw caution to the wind but much of what had passed before was rather stodgy.

Leinster, runners-up for the last two seasons in this competition, were without Ireland backs Brian O'Driscoll and Rob Kearney and lost Gordon D'Arcy to injury midway through the first half.

Sexton and Weir traded penalties after a tense opening and Leinster's star fly-half added another successful kick on 21 minutes.

Dunbar was then shown a yellow card for blatantly coming in at the side of a ruck 5m from his line but Sean Lineen's side defended like lions in the face of stern pressure during the centre's 10-minute absence.

Wave after wave of Leinster attacks were repelled, some just inches from the try-line.

And all the Dubliners had to show for their extra-man advantage was another Sexton penalty.

Glasgow were rarely in the opposition half during the first 40 minutes and the half-time whistle sounded shortly after an ambitious, long-range drop-goal attempt from Weir fell short and well wide.

Glasgow made a bright start to the second half but Weir missed two penalty attempts, one from his own half - the other from straightforward range.

A scampering break from Glasgow scrum-half Chris Cusiter was brought to a halt by the blue shirts of Leinster, with his team-mates struggling to keep up.

Leinster responded with a rampaging run from James Heaslip but Glasgow again defended impressively to stay in touch.

The nerves were obviously catching as Sexton missed the posts but normal service was resumed when the fly-half popped over his fourth penalty.

A rare chink in the Glasgow rearguard then allowed Kearney to grab an all-important try.

Shane Jennings put Nacewa through on a diagonal run and he passed for Kearney to make it over in the left corner. Sexton added the extras from the touchline.

The Warriors showed no signs of wilting and had Leinster pinned back throughout the closing stages.

The ball was spun wide for replacement hooker Hall to crash over in the right corner and in injury-time, Jackson's neat grubber kick was gobbled up by Hogg for a second consolation.

"I was delighted with the effort and the endeavour. We certainly didn't hold back, I thought we defended really well for the 70 minutes until we got enough of a buffer and then we relaxed a little bit knowing that we had the game.

"Credit to Glasgow that they came back a little bit. On attack it was a really frustrating night.

"I think we got some nice line-breaks early on and didn't look after the ball particularly well which was very frustrating. I know talking to the players post-match that there was a lot of frustration around the breakdown."

"They never gave up, their defensive effort on the line was outstanding. You can't keep soaking up and soaking up the tackles and it told in the end," he said.

"We will take some consolation that the guys never gave up and came back to score a couple (of tries), but as I say it was too little, too late.

"We are out (of the competition) and the guys are really disappointed there. We didn't really do it any justice in the first half and we kept giving them the ball back.

"Three line-outs and squandered throws, the scrum in the left hand corner and they pushed us off - there's four set piece attacks gone and we just didn't get enough."