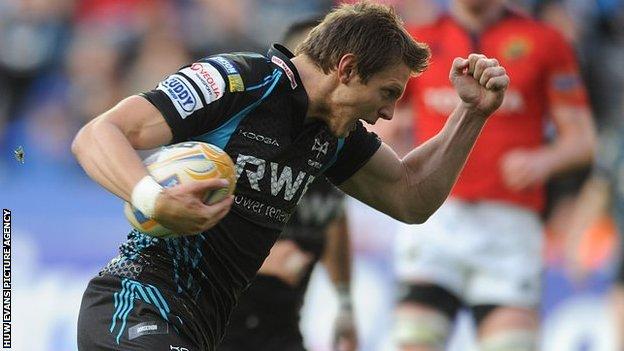 Dan Biggar admits the Ospreys are "praying" for a Glasgow win over Leinster in Saturday's Pro12 semi-final in Dublin.

He scored 25 points in the Welsh region's last-four 45-10 win over Munster.

"We're praying for Glasgow to do us a favour," said Biggar.

"But in all probability it'll be Leinster."

Biggar, 22, rates Leinster as the best in Europe, an accolade that befits a team bidding to secure a historic third Heineken Cup triumph in four years when they face Ulster at Twickenham on 19 May.

"They're without doubt the best team in Europe at the minute," said Biggar.

"They've got a great coach, a great set-up over there and are a fantastic team.

"So we know it's about as tough as you get going out to Leinster in the RDS so it's something which we're excited about."

However, Biggar is confident the Ospreys can win the title no matter who they face or where they play.

He said: "If we play similar to how we did tonight [against Munster], improve ourselves those one-per-cents, we can give it a really good go.

"There's no reason why we can't go out there and win again."

Even so, Biggar says the Ospreys should not "get carried away" with the win over Munster.

Munster had some big injuries... so we've got to put things in perspective

The fly-half, who was overlooked during Wales' Six Nations Grand Slam campaign, scored a try and kicked 20 points in a tally that took him over the 1,000 mark for the region.

He said of the five tries to one win over Munster: "We don't want to get carried away with that.

"Munster had some big injuries with [Ronan] O'Gara only coming on [as a replacement], Paul O'Connell out and a late change with Felix Jones [full-back, pulling out].

"So we've got to put things in perspective as well.

"They weren't at full strength, but from our point we played some very, very good rugby and we're looking to take that into the final and hopefully Glasgow can do us a favour."

Biggar has been touted for a Wales recall for the clash with the Barbarians in Cardiff on 2 June and three-Test tour to Australia that follows it.

He says the Ospreys' form has helped boost that cause.

"I don't think it's any coincidence that the centres are playing well outside me and the pack is going forward," said Biggar.

"And I think if you ask any 10 in world rugby if the pack's going forward and you've got centres running off you it's a pretty easy job as a 10 really.

"So it's a whole team effort.

"I'm confident on the ball - we've got Jose Mourinho here working his magic [coach Steve Tandy] and the boys are happy, so good stuff."