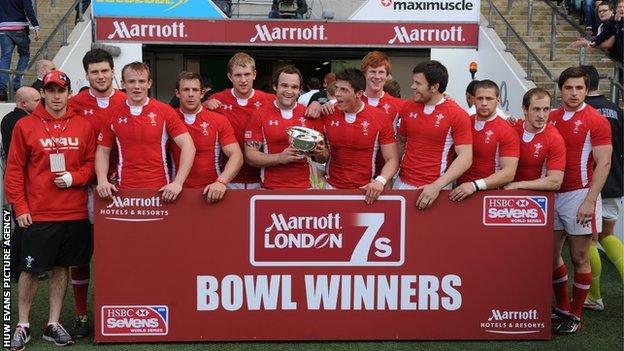 Wales saw off Scotland 27-5 to take the London Seven Bowl title in style at Twickenham on Sunday.

The title went a long way to making up for their shock defeat to Spain in the main competition on Saturday.

Wales had beaten Portugal 28-26 in the Bowl semi-final but had to hold their nerve to come from behind in the dying seconds.

They had reached the last four after a 28-19 win over the United States in the quarter-finals.

But Wales were in the Bowl after defeats to Spain and Fiji in the main competition on Saturday.

They trailed 17-0 at half-time and conceded four tries with Fish scoring Wales' only try.

Fish had run in for Wales' winning try in their opening clash, beating Zimbabwe 19-12.

Wales, seventh in the World Series rankings, went in for three tries from Fish, Smith and Thomas.

In their final Pool game they lost 43-7 against Fiji, who ran in seven tries with Smith scored Wales' only try.