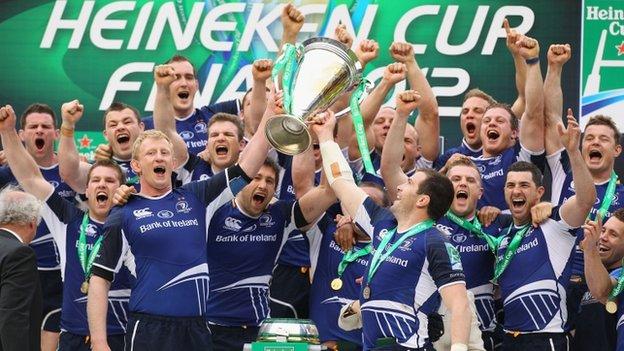 Leinster crushed a spirited Ulster by a record Heineken Cup final-winning margin to become the first side to win three titles in four years.

A penalty try on the resumption put the defending champions 21-6 ahead before Dan Tuohy's try gave Ulster hope.

Leinster became only the second team, after Leicester a decade ago, to successfully defend the Heineken Cup, and the second after Toulouse to win more than two European titles.

While the French giants remain the benchmark with four European crowns, Leinster's 100% record in their three finals and the style in which they have won them has already seen them acclaimed in some quarters as the best Heineken Cup team ever.

In front of a record final crowd of 81,744, their leading lights shone. Rob Kearney was his usual immaculate self under the high ball, Brian O'Driscoll produced several sumptuous offloads including a pearler in the build-up to the second try, and O'Brien was hugely influential.

Ulster, the first of the Irish provinces to win the trophy 13 years ago, started strongly. Centre Darren Cave jinked through a hole in midfield, John Afoa and Stephen Ferris carried strongly, and Pienaar calmly stroked home the first points after seven minutes.

But Leinster started to weave their patterns and launch their off-loading game, and the first try arrived in the 13th minute after they won a turnover on the Ulster 22.

Referee Nigel Owens had already signalled a penalty but the powerful O'Brien sensed an opening and slipped through Tom Court's tackle from close range.

After a lengthy consultation, the television match official ruled the flanker had managed to get just enough downward pressure on the ball, and Sexton's conversion made it 7-3, before he dragged a subsequent penalty attempt wide.

Ulster, expected to play a territorial kicking game, seemed intent on showing it was not just Leinster who could trip the light fantastic.

"We've worked hard in the last 10 months and today was the day where we had to for go it and thankfully we got the win. It's a strong squad and we really want to kick on. Every time we put on a blue shirt there's an energy around us"

A series of off-loads from their forwards - Pedrie Wannenburg, Rory Best, Afoa and Chris Henry in a sparkling move - almost saw full-back Stefan Terblanche worked over in the left corner.

Leinster immediately broke out into Ulster territory, where Eoin Reddan appeared unsure whether he had the pace to get to the line and was held short in the right corner, before O'Driscoll's offload almost put Isa Nacewa over on the left corner.

The legendary centre, who had keyhole surgery on his knee only eight days ago, showed his genius after 31 minutes though, a delicious offload out the back of his hand to the charging O'Brien leading to the second try.

O'Brien weaved around one tackler before being stopped a metre short, but prop Healy - who scored the decisive try in Leinster's semi-final win over Clermont, twisted over out of Andrew Trimble's tackle to score, and Sexton added the extras.

At 14-3 down with nearly 50 minutes to play, things looked ominous for Ulster.

They did fashion a half-chance before half-time only for fly-half Paddy Jackson to go it alone a few metres out with two men outside him. The 20-year-old then showed his inexperience again by fluffing a simple drop-goal attempt inside the Leinster 22.

"Ulster attacked from everywhere and were competitive and fierce but they've come up against one of the great European teams playing an incredible style of rugby. I'm not sure anyone could have lived with Leinster today."

The underdogs needed something before the interval, and Pienaar provided it with a beautifully-struck penalty from several metres inside his own half to bring the first half to a close.

Any thoughts of an Ulster comeback quickly evaporated on the resumption. A thumping tackle from Nacewa on Cave was a statement of intent, and they were ruthless in exploiting Jackson's naivety.

The youngster kicked out on the full from just in front of his own 22 to hand Leinster an attacking platform, his last act before being replaced by Ian Humphreys.

The champions duly built up a head of steam from the line-out and when Trimble dived in to bring down the maul rumbling to the Ulster line, referee Owens had no hesitation in awarding a penalty try.

Sexton's conversion gave Leinster a 15-point cushion, which remained the case after Pienaar and Sexton exchanged penalties in quick succession.

With 24 minutes left and 24-9 down, Ulster passed up the chance of an easy three points in front of the posts in favour of a scrum. It looked a questionable decision, even more so when Wannenburg's speculative blind pass behind him went forward.

Humphreys then went solo with numbers outside him as another chance went begging. But Ulster kept plugging away, none more so than the admirable Afoa. Their persistence paid off as Paddy Wallace worked some room and popped up a pass for lock Tuohy to dive over in the left corner.

Pienaar missed his first kick of the day to keep it a 10-point game, and Leinster roused themselves to win a penalty that Sexton slotted to keep them in a comfort zone.

He added another to seal victory with six minutes left after Terblanche was sin-binned for a tip tackle on Leinster replacement hooker Cronin.

There was still time for replacement prop Van der Merwe to go over for the fourth try, equalling Brive's record of four tries - and their 19-point winning margin - in the 1997 final.

Fergus McFadden missed the conversion, but when another length-of-the-field move saw Cronin sprint in, it was a fitting way for Leinster to seal their place in Heineken history.