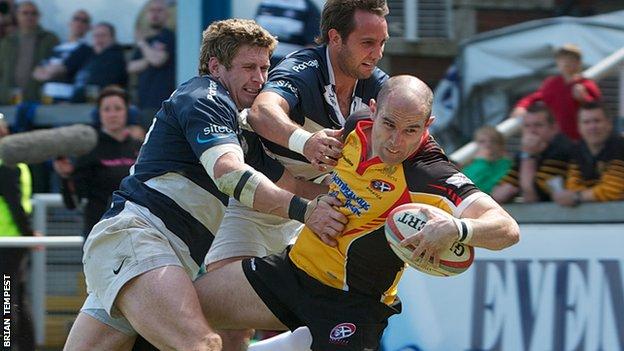 Cornish Pirates boss Ian Davies says he feared his side had missed the chance to make the Championship final after conceding two late tries at Bristol.

George Watkins and Will Helu got Bristol within seven points of an aggregate win, before a late Rob Cook penalty sealed a place in the final.

"I thought were were going to throw it away," Davies told BBC Radio Cornwall.

"But luckily the boys dug deep and Burg [Phil Burgess] got a turnover right at the end and Cookie put one over."

Davies continued: "We'd worked really hard for 99.9% of the two legs and we were going to throw it away right at the end."

But Davies was quick to praise his squad after their 63-53 aggregate win over a Bristol side that topped the regular-season table, and were many people's favourites to return to the Premiership after three years in English rugby's second tier.

"We wanted to win the game," Davies said.

"Certainly we did enough in the first half to be slightly further ahead than we were, but in the second half we went into our shells and sat on on the 21-point lead and Bristol came at us.

"Momentum was with them, just as it had been with us in the second half last week, and it was like having a tidal wave against you and we were trying to stop it with a paddle brush."

The Pirates will face London Welsh over two legs in the final after they beat Bedford 30-27 on aggregate.