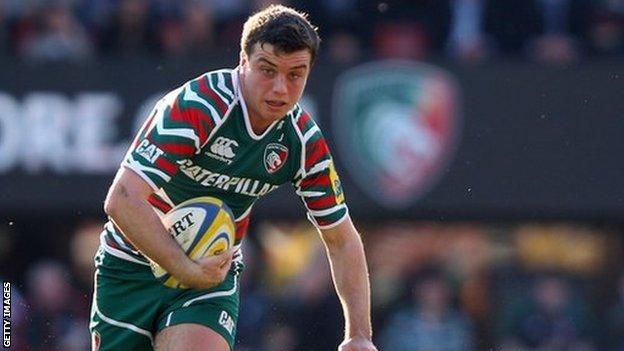 The 19-year-old replaced the injured Toby Flood in the 24-15 Premiership play-off semi-final win over Saracens.

But despite Ford's match-winning display, Cockerill confirmed Flood will start the Premiership final if fit.

"Let's see how George develops. He has played a handful of Premiership games, but there is no rush. He has 15 years of rugby ahead of him," he said.

The International Rugby Board young player of the year was starting only his second Premiership game in seven months but produced a display beyond his tender years to dethrone the Premiership champions.

And despite being one of the stars of England Under-20 World Cup last summer he will skip the competition this year after an agreement between Leicester and England.

"The best thing for George long term is to have a pre-season to make him robust, leaving the guy at home to get some quality conditioning into him," said Cockerill.

"If he kicks on again next season he won't have a summer at home again, will he? I am not too keen to push him too hard too soon. That can be detrimental sometimes.

"We will look after him, and when England want to pick him I will be delighted for him."

Ford, who played a key role in Leicester's LV= Cup triumph in March, is hoping a summer spent working on his fitness will help him in his battle for a place in the Tigers team next season.

"I am going to go away and have a rest, then come back and do a full pre-season, which I think will be great for me, then come out all guns blazing next season.

"You want to do pre-season properly, putting weight on while also staying agile and keeping your speed up."

The teenager, who is the youngest player to ever appear in a professional rugby game, helped create two tries and kicked 14 points as the Tigers reached their eighth consecutive Premiership final, where they will play Harlequins on Saturday 26 May.

But Cockerill insists that the Tigers' club culture dictates that if England stand-off Flood is fit he will take the field at Twickenham.

"If Floody is fit, he will start," Cockerill said. "He is a very good player, and he has earned the right to play, if he is 100% right to play.

"When George Ford is first choice at some point, and there is someone else coming through, then maybe he will have earned the right to play too.

"That is the way we do things at this club."

The son of former England defence coach Mike Ford also agreed that Flood should play against Harlequins, saying: "I think Toby deserves to start in the final.

"He has played awesomely well since coming back from the World Cup and he deserves to play."