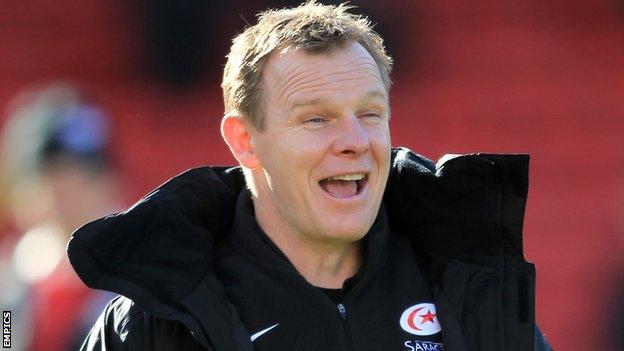 Saracens director of rugby Mark McCall is satisfied with his side's progress despite their defeat against Leicester in the Premiership play-off semi-final.

The London side won the title for the first time in their history last year.

But they lost 24-15 at Welford Road on Saturday as they ended the season without any silverware.

"It hasn't been a bad season," McCall told BBC Three Counties Radio. "This year alone we came third in the regular season, two points behind the leaders."

"We got through to the quarter-finals of the Heineken Cup, which is the first time we've done that."

The Sarrries finished behind Leicester and Harlequins in the Premiership table and lost 22-3 to Clermont Auvergne in the Heineken Cup last month.

Their Premiership final triumph last year marked the realisation of a 16-year dream for multi-millionaire owner and chairman Nigel Wray and the club were desperate to achieve back-to-back titles.

However, McCall has been buoyed by seeing Owen Farrell, 20, win his first cap for England and play a key role in their Six Nations campaign, while centre Brad Barritt also made his debut.

"We've got some new players who are playing for England, so there are a lot of good things happening at the club," he said.

Their first-team coach Andy Farrell also turned down the opportunity to assist new England coach Stuart Lancaster on a permanent basis to remain at the club.

Meanwhile, Saracens will confirm the timescale for their move to their new stadium in Barnet within the next fortnight.

The north Londoners are set to relocate to a new stadium at Copthall after spending the past 15 years playing the majority of their home fixtures at Championship football club Watford's Vicarage Road ground.

"The first step is to finalise our construction schedule at the new stadium," said a club spokesman.

"We will play in Barnet next season, but we need to be 100% sure of the opening date before we can announce detailed plans.

"We remain in discussion with Watford FC about the availability of Vicarage Road, and we are also considering other options."