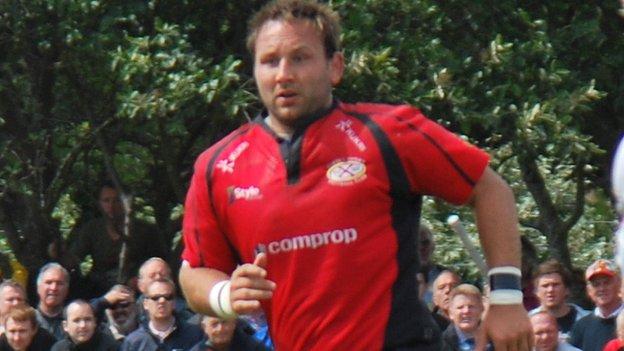 Jersey prop Dai Maddocks is to leave the club to return to the UK.

The former Coventry and Newport Gwent Dragons prop is the third player to leave the side since they were promoted to the Championship after Jim Brownrigg and Steve O'Brien retired.

"He's moving back to the UK for various reasons other than rugby," said Jersey director of rugby Ben Harvey.

"We send him off with our best wishes and he'll get many offers as he's a very good player."

Maddocks joined Jersey in the summer of 2010 and played 36 matches for the club as they won successive promotions from National Two South and National One.

Jersey boss Ben Harvey says that he is looking to sign at least six players over the summer as he builds a squad for the club's first season of Championship rugby.

"We need to strengthen the squad, we need to bring more players in, we need to provide some competition in certain areas and we need some quality as well," he said.

"The lads we're trying to get in will improve the squad, put their arms around some guys and knock the heads off others, and that will make the squad work even better," he told BBC Radio Jersey.

But Harvey says there will be no famous names arriving on Jersey's shores, rather players with the potential to make it into the top flight.

"We haven't got the budget to go off and get marquee players, so it's got to be up-and-coming players.

"You need players who are hungry and willing to go on to the next level.

"I don't really want them here in two years, if they're that good and got than much potential they should be in the Premiership - we want lads who are on the way up, on an upward curve."