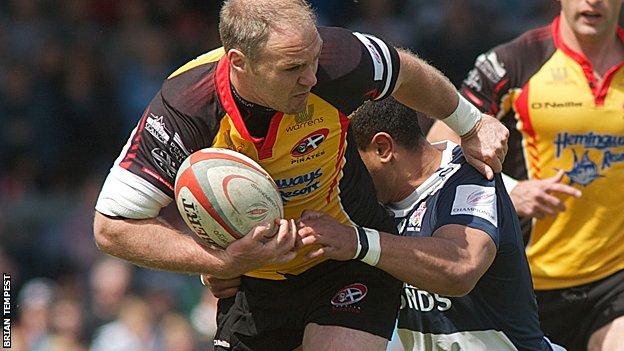 The Pirates lost to Worcester 12 months ago and face a London Welsh side hoping for promotion to the Premiership.

The first leg is at the Mennaye on 23 May with the return leg at Oxford United's Kassam Stadium a week later.

Talk is that they can get promoted, so there's a hell of a lot of pressure on them

"The two-legged semi-final [against Bristol] was similar to the final last year and that's why we set out to win both games because that's what Worcester had done. They weren't sitting on a lead, they were going out to win games," Davies said.

"If you win both games by a point you're the winners - it's as simple as that.

"If you win the first leg by 99 points but lose the second by 100 you've lost, so it's one of those where we set out to win both games."

And Davies added that with Welsh will be nervous as they aim to break into the Premiership for the first time.

"Talk is they can get promoted, so there's a hell of a lot of pressure on them.

"For us it's a big shiny trophy and you want one in your trophy cabinet.

"We can only win two, the British and Irish Cup and the Championship.

"We blew the British and Irish Cup by losing to Cross Keys so this is the only thing we've got left to try and win, so let's go and win it."