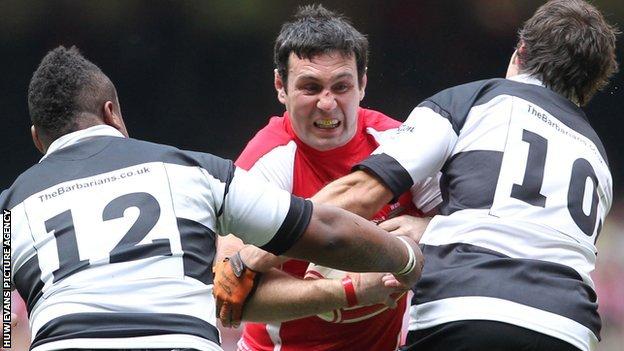 Wales veteran Stephen Jones has been ruled out of facing his country for the Barbarians on Saturday, 2 June in Cardiff by injury.

But injury has put paid to both players' hopes.

Saracens hooker Schalk Brits has also been ruled out.

The Baa-Baas also face England on Sunday, 27 May and Ireland at Gloucester two days later.

Wales have named a 38-strong squad ahead of the clash with the Barbarians and the four-match tour to Australia that follows.

But caretaker Wales coach Robert Howley has confirmed 15 leading players will fly down under before a full Test XV takes on the invitation club at the Millennium Stadium.

Wales are alone in deciding to award caps for the game against the Barbarians with England and Ireland opting not to do so.

That gives 99-cap veteran Martyn Williams the chance to bring down the curtain on his Test career by joining former captain Gareth Thomas on the 100 mark.

But retiring Cardiff Blue Williams will not bow out with fly-half Stephen Jones lining up for the Baa-Baas having made a record 104 Wales appearances.

He has seen fellow Ospreys Paul James and Ryan Bevington climb the Wales rankings along with Scarlet Rhodri Jones, who was an uncapped Six Nations squad member and is in contention for the games in June.

Wing Williams makes his final top-flight appearance for the Barbarians.