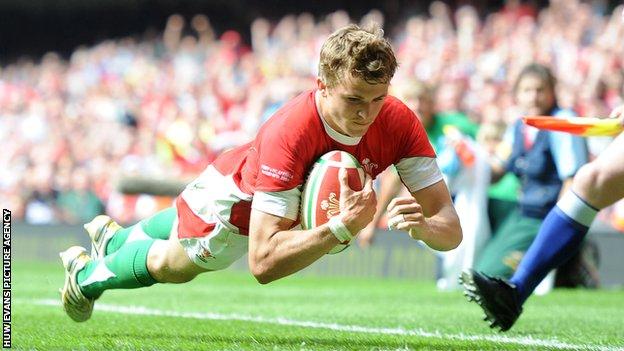 The 20-year-old wing impressed in the junior showpiece and was top scorer with 61 points in South Africa as Wales finished third, their highest finish.

Prydie from the Ospreys having spent much of last season on loan at London Wasps.

"I am sure he will win more Wales caps," said Dragons coach Edwards.

Prydie, the youngest player in Welsh Test history, has won four international caps and hopes to kick-start his Wales career with his move to Rodney Parade.

The Porthcawl-born player kicked six points in their historic win over New Zealand and touched down twice in a 29-point haul in Wales' comprehensive victory over Samoa in the group stages at the recent Junior World Championships.

Dragons boss Edwards, the former Wales under-20 coach, is confident that Prydie will have an illustrious Test career.

"Tom has that ability and he is still so young," said Edwards.

"He has just turned 20 and he has a huge amount of time ahead of him.

"It's just important that we take him through it at the right pace and get him onto the Wales stage.

"It's important that I fuel his ambition and get more caps for him.

"He wants to play for a Welsh region and play for Wales. I was happy he made that decision.

"He went to Wasps on loan and there was interest all around Britain but it just proves what Tom wants to do."

Prydie became the youngest player in Welsh Test history against Italy in the 2010 Six Nations, aged 18 years and 25 days, and went on to become Wales's youngest try-scorer against South Africa three months later.

He can also play at full-back and Edwards is confident that Prydie will resurrect his career back in Wales.

"I think Tom showed his obvious potential when he played for Wales at such a young age," said Edwards.

"He is a great strike runner with huge amount of rugby ability. I just think it is great for Tom to come here and open a new chapter in his career.

"Tom was a young man getting capped by Wales and he deserved that at the time but for me it's all about looking after the player and giving him the opportunity to demonstrate the talent he has got."