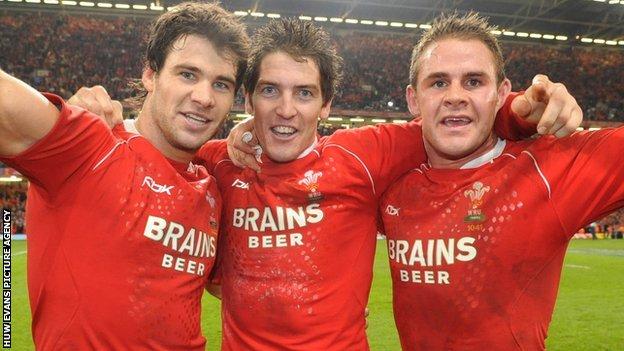 The French Top 14 teams are under no obligation to release Wales' players ahead of the 2 June clash against the Barbarians.

But Bayonne (Phillips) and Perpignan (Hook) have told the players they can join the Wales squad on 21 May.

"It means Mike and James will be fully involved in the complete preparation programme we have in place."

Bayonne and Perpignan's Top 14 season has come to an end with both having finished in the bottom four, but having staved off relegation.

However, full-back Lee Byrne's Clermont Auvergne ended the regular season second and are in the championship play-offs.

Byrne could be involved in the 2 June semi-final - the same day that Wales face the Barbarians - and the 9 June final.

Because of that, he will only be considered as a standby player while Howley's squad are in Australia.

Wales' three-Tests against the Wallabies kick off in Brisbane on 9 June.

Howley added: "We are extremely grateful to the French Rugby Union and the individual clubs involved for taking this step.

"It is a gesture which will undoubtedly benefit the players and I know they will want to thank their individual clubs for helping them fulfil their international commitments with Wales.

"It is an example of northern hemisphere rugby working in unity for the benefit of our players and the game in general."

Howley has confirmed 15 leading players will fly down under before a full Test XV takes on the Baa-Baas at the Millennium Stadium.