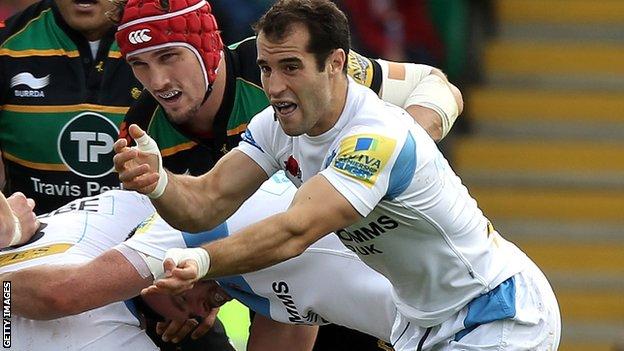 England boss Stuart Lancaster wants Exeter Chiefs scrum-half Haydn Thomas to impress him after calling him up for the match against Barbarians.

Thomas, 29, was picked in this season's Premiership dream team.

But, despite support from Exeter boss Rob Baxter, he missed out on England selection for the tour to South Africa.

"It's an opportunity for him to put a marker down in relation to the other nines in the country," Lancaster told BBC Radio Devon.

"We're going to bring him into the Barbarians camp this week to have a good look at him."

Despite finishing fifth in the Premiership Exeter had just one player, Tom Johnson, selected for the England party to tour South Africa.

Earlier this month Baxter urged Lancaster to try out Chiefs players including Thomas, winger Matt Jess and back-row James Scaysbrook, who was nominated for the Premiership Player of the Year award.

"He was close," Lancaster said of Scaysbrook.

"Part of the dynamic that we've got to achieve is getting the right blend in that back row.

"We haven't settled on that and certainly James is by no means out of the equation.

"He just missed out this time, he is very close, but the door is not shut on him or any other player."