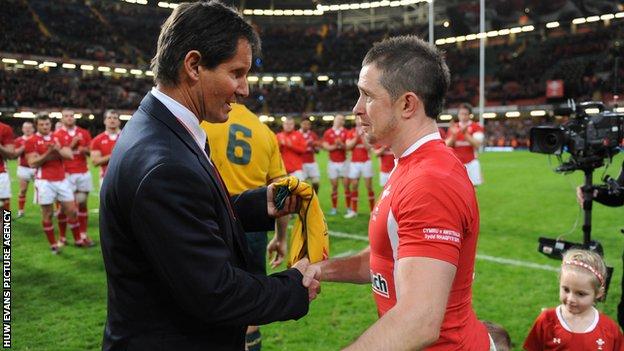 Australia coach Robbie Deans is wary of the threat Wales will pose in the Test series which kicks off on 9 June in Brisbane.

"After winning the Six Nations so impressively, there's no doubt that Wales see this tour as the chance to take the next step," Deans said.

"They were quite vocal about that at the end of the tournament, saying it was time they beat one of the major Southern Hemisphere nations.

The players all want to be on this trip. That, in itself, is a statement of their intent

"It was also clear, when we were in Cardiff last December for the James Bevan Trophy Test, that they believe that goal is within their reach."

Wales play the Barbarians before their three-Test tour of Australia, where they will play a midweek game against Super 15 outfit ACT Brumbies in Canberra.

The last time Wales beat the Wallabies on Australian soil was back in 1969.

Australia ran out comfortable 24-18 winners over Wales in Cardiff back in the autumn when the two sides last met. It was wing Shane Williams' final game of Test rugby for his country.

Wales finished fourth at last year's Rugby World Cup, losing the third and fourth play-off game to the Wallabies before going on to win the Grand Slam in the RBS 6 Nations.

"The core of the Welsh squad has been together for a long time, and they are used to being successful," Deans said.

"You only have to look at the settled nature of the squad they have named - there are very few injuries. The players all want to be on this trip. That, in itself, is a statement of their intent."

Injuries rule out centre Jamie Roberts and hooker Huw Bennett, while 15 of the squad will miss the Baa-Baas game at the Millennium Stadium to fly to Australia early to acclimatise for the first Test on 9 June.

And because Clermont Auvergne could be in the French Top 14 final that day, their Welsh full-back Lee Byrne is under consideration only for tour standby duty.

Ospreys lock Ian Evans will miss the first Test against the Wallabies to get married, but will be available for the second and third Tests.

Captain Sam Warburton is set to be part of the early party going to Australia. Martyn Williams is expected to win his 100th Wales cap coming off the bench against the Barbarians.

Along with Warburton, open-side Justin Tipuric will be part of the advance party to Australia.

The likelihood is Scarlets' Aaron Shingler, who made an impressive Wales debut in the Six Nations against Scotland, will start at seven against the Baa-Baas, with Williams on the bench.

Biggar has impressed recently, not least with his 25-point performance in the Ospreys' 45-10 victory over Munster to reach the Pro12 League final against Leinster.

The 22-year-old won the last of his nine caps against Australia in December, 2011's post-World Cup clash in Cardiff having seen Rhys Priestland overtake him in the Welsh pecking order.

The main injury concerns for Howley have been Scarlets hooker Matthew Rees, who has an ankle problem and the midfield options because of Roberts' knee injury.

Scarlets centre Jonathan Davies has been named after recovering from a hernia injury since the start of April, while Scarlet Scott Williams (shoulder) has been included despite struggling recently.

Ospreys centre Andrew Bishop is another to earn a recall, along with Scarlets back-five forward Josh Turnbull, former Newport Gwent Dragons wing Aled Brew and his ex-team-mate wing Will Harries.

Having been an unused and uncapped member of Wales' Six Nations squad, Beck has a chance to press his long-term midfield claims.

The Barbarians match will be Wales' first since they completed the Six Nations Grand Slam against France in March.

Howley was appointed caretaker coach for the summer after Warren Gatland, the Wales head coach, was ruled out after he fractured both his heels in a fall in his native New Zealand.