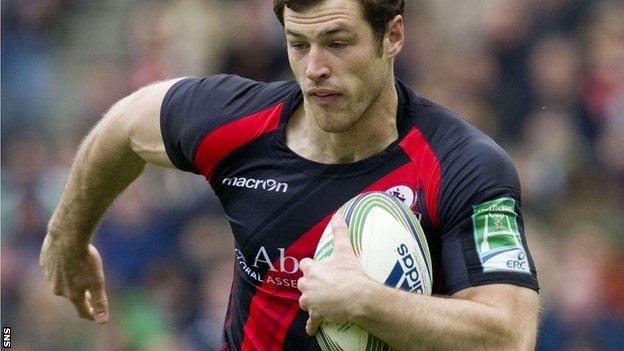 Tim Visser says he is "honoured" to be named one of five uncapped players named in the 28-man Scotland squad for the tour of Australasia.

Edinburgh's Dutch winger will become eligible for Scotland on 12 June on the grounds of three years residency since his arrival from Newcastle Falcons.

Edinburgh back Tom Brown will also travel with the party.

I would love to represent Scotland

Visser was relishing the prospect of playing for the side coached by Andy Robinson, who brought him to Edinburgh in 2009.

"Having lived here for such a long time now, I've got to know the country and the people very well and I feel very much part of the country," said the 24-year-old.

"I feel really at home here and the people have been great.

"I would love to represent Scotland."

Visser, who was the Pro12 players' player of the year and this season's leading try scorer, will be unable to face Australia on 5 June.

However, he will be eligible in time to feature against Fiji on 16 June and Samoa a week later.

The winger will be an especially welcome addition to Robinson's options among the backs as Lee Jones and Rory Lamont will be absent from the tour through injury, while Chris Paterson and Simon Danielli have retired.

That has given an opportunity to Brown, Grant, Harley and Ryder to stake their place in the starting XV, while Warriors prop Jon Welsh, like Edinburgh centre Matt Scott, is included after making his maiden Scotland appearance during the Six Nations.

The Scots finished that competition with the Wooden Spoon and will be seeking to arrest the worst run since 1998 after seven successive losses.

Robinson said Tests in Australasia would be "tough" but believed his players would rise to the occasion.

"We'll be playing against three attack-minded teams on their own turf," he added.

"But it's an important opportunity to start the rebuilding process after a disappointing Six Nations.

"One quarter of the squad has yet to start an international, but we've seen from the manner in which Edinburgh and Glasgow have finished the domestic season that there's confidence that we will be looking to build on."

Robinson will be joined on tour by assistant coach Scott Johnson, but Matt Taylor, who has agreed to join as defence coach, will continue his duties with Super Rugby Queensland Reds and is not part of Scotland's touring party.

Johnson and Taylor replace Gregor Townsend and Graham Steadman, whose contracts were not renewed after the Six Nations.