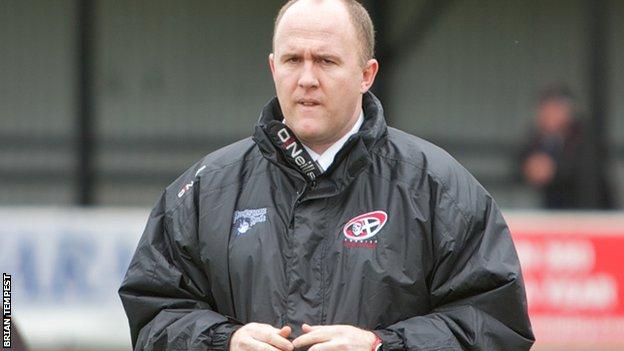 Cornish Pirates head coach Ian Davies says Cornwall Council's decision not to grant £10m of funding towards a new stadium is 'a kick in the teeth'.

The Pirates play London Welsh in a two-legged play-off final next week for the Championship title.

Councillors voted 55 to 46 against the funding, although the cabinet could overturn that decision.

The Pirates cannot be promoted to the Premiership until they move way from The Mennaye Field in Penzance.

Their present home does not meet the Premiership's minimum capacity criteria of 10,000 and the club had hoped to share a proposed Stadium for Cornwall at Threemilestone with Truro City Football Club and the local college.

"It will be very disappointing if there is no stadium because that will be the end of the dream," Davies told BBC Radio Cornwall.

"There's a massive talent pool of sportsmen in Cornwall and you can see that across all sports, surely a county of Cornwall's stature need a stadium to be built."

The lack of a stadium has already seen Pirates lose previous boss Chris Stirling to a job with the New Zealand RFU.

Davies says the decision could affect his players ahead of next week's Championship play-off against London Welsh as they had hoped to be playing in a new ground at some point during the 2013-14 season.

"This is a bit of a kick in the teeth for us.

"It would have been a nice boost for us ahead of the final if we knew that the stadium was going to go ahead in the future.

"It affected us last year in the final in that Worcester had the goal of promotion and we didn't.

"This year we could have the same situation if London Welsh's proposal to be accepted into the Premiership goes ahead, they'll have that motivation and we won't.

"There's only so long as players and coaches that you can live on the pride of the shirt."