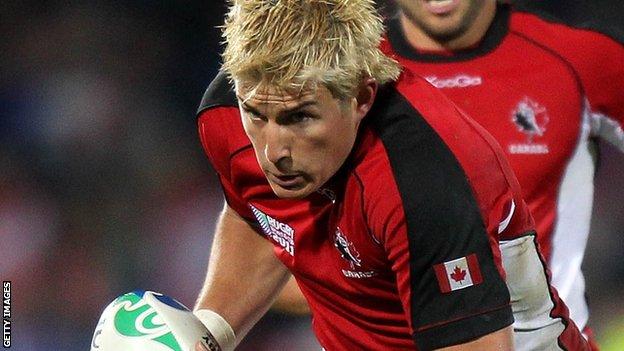 Plymouth Albion boss Nat Saumi says he will work hard to try and get in quality faces to replace the experienced players leaving the club.

Saumi is set to lose and goal-kicking full-back James Love who have decided to leave the Brickfields.

"Those are experienced players who have been in the Championship for a while.

"I'll just have to work hard to get some other players to come in and replace them," Saumi told BBC Sport.

Love scored 250 points last season as he helped Albion avoid relegation from the Championship while lock Hotson, who played at last summer's World Cup, made 20 appearances in this season.

"He came up from about three leagues below and has really developed at Plymouth.

"But he lives in London and there might be some interest from clubs which are closer to home and where he feels comfortable.

"Tyler has other options and it's their choice and good luck to them, I hope they continue to do well in their careers."

But veteran centre Keni Fisilau has agreed a new deal.

The 36-year-old former Tonga international first joined Albion in 2001 and will remain in south Devon along with scrum-half Ruairi Cushion, winger Paul Bailey, young prop Jack Andrew and flanker Wayne Sprangle, who has been with the club since 2008.

But Saumi says his job will be made difficult by Albion's financial problems.

The club has raised almost £250,000 from supporters after putting out a plea for more funding at the start of the year as it came close to bankruptcy.

"It is always tough with what we are going through at the club," Saumi said.

"But all I can do is try my best and do my best to come up with a solution."