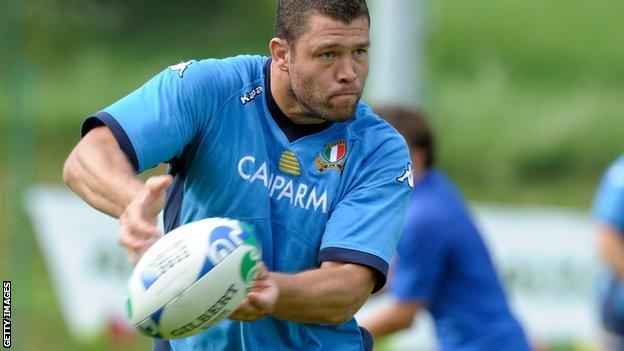 Newcastle Falcons have made their second signing of the week by recruiting Italy international lock Carlo del Fava.

The 30-year-old, who was born in South Africa, has won 54 caps for the Azzurri and joins Newcastle from Aironi.

Del Fava played in the last two World Cups and his former clubs also include Natal Sharks, Bourgoin and Ulster.

He told the Newcastle club website: "I am delighted to have signed for a club with a bright future."

That may prove to be wishful thinking, at least in the short term, with Newcastle still facing the threat of relegation after finishing bottom of the Premiership table.

They will go down if London Welsh win the two-leg Championship play-off final against Cornish Pirates and their application to join the top flight is accepted.

However, the Falcons would be favourites to bounce back at the first attempt with former Harlequins boss Dean Richards taking over at Kingston Park.

"I am really looking forward to the challenge of playing in England," del Fava told the club's website.

"There are some exciting times ahead for the club, further strengthened by the appointment of Dean Richards as director of rugby."