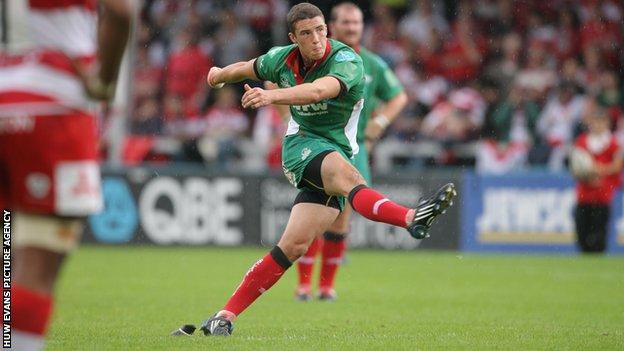 World rugby chiefs have ruled that Steven Shingler is ineligible to play for Scotland and his international future is tied to Wales.

The International Rugby Board heard Shingler's appeal in Dublin on Tuesday.

The London Irish fly-half had claimed he was not aware an appearance for Wales Under-20s had decided his international eligibility.

"The council therefore determined that Steven Shingler is tied to Wales," said the IRB in a statement.

Former Scarlet Shingler, 20, found himself at the centre of an eligibility row after he was named in Andy Robinson's Scotland squad for the 2012 Six Nations campaign.

A few weeks later, Shingler's elder brother, Aaron, 24, made his debut at openside flanker in Wales' 27-13 win over Scotland in February.

Wales objected to Steven Shingler's inclusion in Scotland's tournament squad because he had played for Wales Under-20s, the nation's designated "second team".

An International Rugby Board panel had ruled that Shingler could play only for Wales and not for Scotland, having played for Wales Under-20s against France Under-20s in 2011.

Shingler appealed against the decision and the IRB agreed at a special meeting to rule on the issue of what is a country's second team.

The IRB released a statement that confirmed Shingler had lost his appeal, it read: "Under the regulations committee decision, Shingler was deemed to have been captured by Wales having represented the Wales Under-20s team against the France Under-20s team in a 2011 Six Nations fixture.

"Both Wales and France had individually designated their under-20 teams as their next senior national representative teams.

"In accordance with IRB Regulation 2, the IRB Council has the power to endorse or overturn the decision of the regulations committee.

"Following the Scottish Rugby Union's appeal of the Shingler decision, the IRB Council considered and determined the matter during its annual meeting in Dublin.

"Council, having considered all the facts and having heard submissions from the SRU and WRU legal representatives, dismissed the appeal and upheld the decision of the IRB Regulations Committee.

"The council therefore determined that Steven Shingler is tied to Wales in accordance with IRB Regulation 8 and therefore is ineligible to represent another Union."

Scotland coach Andy Robinson expressed his disappointment at the decision as the Scottish Rugby Union hinted that it had not yet given up the battle.

"The Scottish Rugby Union have backed Steven and backed myself in the decision that we made and it's unfortunate that we lost the case," said the Englishman.

"I really feel for the player, because he made what was probably a difficult decision at the time to choose to play for Scotland.

"He believed he was qualified to do that and put all his eggs in that basket and it's been taken away from him. That's disappointing."

Asked whether the SRU and Shingler will take the case further, Robinson replied: "That will be for Steven to now consider what he wants to do."

The WRU has welcomed the IRB ruling, which ruled that it had complied fully with all regulations and acted properly when informing players of their eligibility for Wales.

WRU head of rugby Joe Lydon was satisfied that the issue of Wales Under-20's now being Wales' second designated team had been cleared up.

"It was vitally important that the WRU defended its stance over this issue," said Lydon.

"It was certainly not just about the individual player concerned but a case of needing total clarity on the situation, both retrospectively and going forward.

"The key factor for us was determining that we have acted properly, and continue to act properly as a governing body over this issue.

"If we had left any doubt over this debate then many players, across many Unions, would have been left in a state of confusion over their international status.

"The IRB ruling has now been confirmed and the WRU will continue to follow the operational policy we already have in place which ensures all players are fully informed of the IRB regulations and their status within them."

An initial informal assessment by the IRB had determined that the player appeared to be tied to Wales but the SRU formally asked the IRB regulations committee to review the case.

However, the panel also pointed out that the full IRB council had the right to overturn the decision and recommended that the issue of players being tied to countries while playing at Under-20 level should be reviewed.