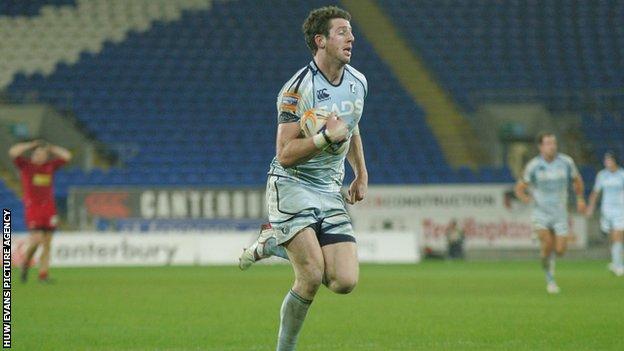 Alex Cuthbert has agreed to stay in Wales after he signed a new one-year deal with the Cardiff Blues.

Wales's Grand Slam-winning wing had been linked with a lucrative move to French clubs Toulon and Racing Metro.

The 22-year-old burst on to the Test scene during Wales' Grand Slam campaign, having begun the season on a Blues development contract.

"I am very pleased to be re-signing for another year and I can now look forward to... next season," Cuthbert said.

"I had a few offers outside of Wales and having gone through all the options thoroughly with family and friends, I came to the conclusion that the best option was to stay at the Blues, showing my loyalty to the region, coaches and the fans."

The 6ft 6in, 16st wing made his Wales debut off the bench in last December's international against Australia.

Cuthbert then filled the berth vacated by retired wing great Shane Williams for Wales's 2012 Six Nations campaign, scoring tries against Scotland, Italy and then France in the Grand Slam decider.

He has won six caps so far and is in the squad for June internationals against the Barbarians and a three-Test tour of Australia.

"Playing for Wales was a huge part of my decision to stay with the Blues and playing for the region regularly will hopefully strengthen my chances of keeping my place in the Wales team," Cuthbert added.

"Obviously with Phil [Davies] taking over as head coach it's exciting times for the region as well. I know Phil from my time with the Wales Sevens where he was involved.

"He's a great coach, I've heard he's very well organised and puts good structures in place which I know will benefit the club next season.

"I'm also very excited that the Blues are moving back to the Arms Park. I'm yet to play there in front of a full crowd so hopefully we can do that next season.

"I've watched a few games down there and the atmosphere is unbelievable and if we maintain good crowds that will help us no end on the pitch."

The Blues had stated they had made the winger a six-figure offer to stay and play his rugby in Wales.

Cuthbert's decision to stay - at least for another year - does buck the trend of players leaving Wales, with 10 players already departed amid Welsh regional rugby's on-going financial problems.