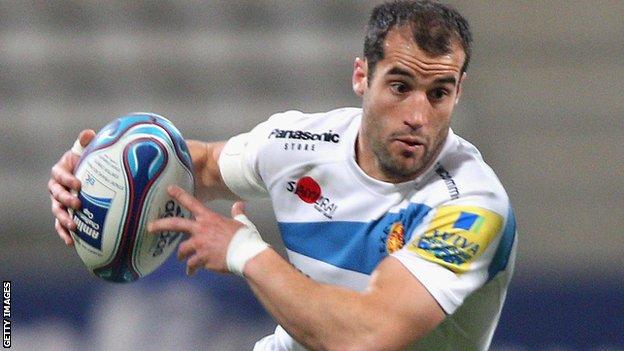 Exeter Chiefs scrum-half Haydn Thomas is relishing the opportunity to be part of the England squad.

Thomas, 29, has been called up for next week's match with the Barbarians after a fine season for the Chiefs.

"I'm immensely proud and very excited about getting the potential opportunity to play," he told BBC Radio Devon.

"I had some feedback to say that I'd had a good season and that I was in contention and on the radar, but to get the phone call was brilliant."

England boss Stuart Lancaster has urged Thomas to impress him next week when he trains with the national squad, having been called up because Danny Care and Ben Youngs are involved in the Premiership final Between Harlequins and Leicester.

Thomas believes his selection is recognition for the work that Exeter have done this season in finishing fifth in the Premiership.

"It's not just me and Tom Johnson who have been named in the squad, it's been a real team effort and the fact that the team's done so well has given myself and Tom the opportunity to get into one of these squads.

"There are a lot of good players at Exeter, they're all English qualified, and I'm sure with time there'll be more people that will get called up," Thomas added.