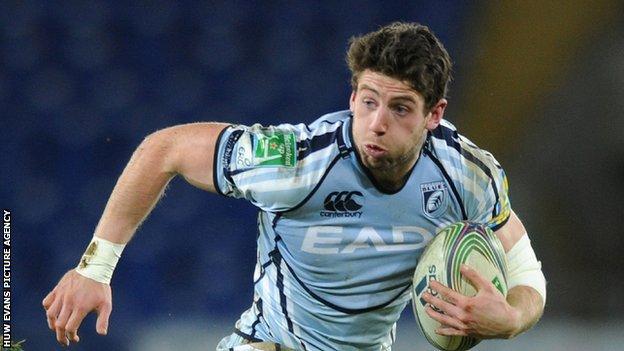 Cuthbert, 22, had been linked with a lucrative move to French clubs Toulon and Racing Metro after a stellar year that saw him burst onto the Test scene.

But he has opted to sign a new one-year deal to stay with the Welsh region.

"He's made a very educated, very mature decision for a guy who has had a lot thrown at him in a short space of time," said director of rugby Davies.

"He's a young player who's come through the system here and it's important that we've kept a player of his quality.

"Obviously he's a good try-scorer, he's had a fantastic first season playing for Wales and the Blues and there's more to come, that's for sure.

People understand Alex Cuthbert here, they understand where he is in his career

"We're excited about trying to expose him to more development for the benefit of the Blues, obviously, and Welsh rugby as a whole."

Cuthbert might have been expected to earn wages in France or England double or triple what he can command at home.

The four Welsh regions have imposed a £3.5m salary cap on themselves for next season, which compares unfavourably to that imposed on English Premiership sides and is dwarfed by the £7.1m limit of French Top 14 clubs.

From the 2012-13 season, English sides can spend a maximum of £4.5m if 'academy credits' for fielding home-grown talent are taken into account, and they can also nominate one marquee signing to be excluded from the cap.

While Davies understands why so many Welsh players have opted to play their club rugby abroad, he says there are distinct benefits - especially for players at the start of their career - to staying within Wales.

"I respect these players and they've got a hard job to do. I love coaching in this day and age but I wouldn't have liked to played, if I'm honest, for a variety of reasons," Davies added.

"They're all here for him and I'm just pleased he's staying and hopefully he'll develop even further."