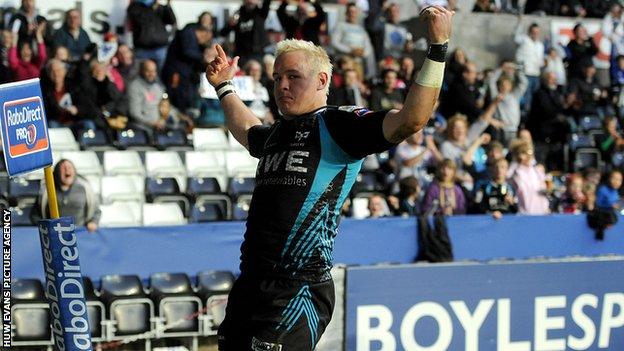 Wing Hanno Dirksen has signed a new two-year deal to stay with the Pro12 finalists the Ospreys.

The 21-year-old, who has scored eight tries in 24 games, won the RaboDirect Pro12 try of the season award for his score against Edinburgh in Murrayfield in February in 2012.

"The Ospreys are the best team in Wales and I'm really happy to be a part of the organisation," said Dirksen.

The South African will qualify for Wales in 2014.

Dirksen arrived in Britain to study at Truro College on a scholarship for the 2008-09 academic year before transferring to Neath Port Talbot College in September 2009.

His initial spell in the UK was on a student visa, when he played for the Ospreys as an amateur, and because of that his residency qualification for Wales started in January 2011.

He signed for Swansea in the Principality Premiership, ended the season as top try-scorer with 21 tries in 22 games and was voted the Young Player of the Year.

Those performances persuaded the Ospreys to sign him in January 2011.

"It's great to be playing and training with top-class players, Wales internationals and Lions, it's been an absolutely amazing year for me," he said.

"It's good to be finishing off the season with a final, we have worked hard to get there and now we have to make sure we don't let anybody down."

Ospreys forwards coach Jonathan Humphreys believes Dirksen will make his mark when he eventually qualifies for the Wales.

"The sooner he gets eligible for Wales the better for the Welsh team," he said.

"It's [wing personnel] an area of strength right now [for Wales] and Hanno is certainly going to add to that.

"He has a huge future. He is big, he's strong and he's quick. He has the ability to score tries."

Ospreys open-side Justin Tipuric added: "Hanno's a good guy. He's playing well at the moment - he'll run into a brick wall for you.

"There are plenty of good wings in the Wales team at the moment but it's [qualifying for Wales] is an option for him."

Dirksen hails from Krugersdorp in the Gauteng province of South Africa and moved to the United States with his family in 2006 while still a teenager.

He represented the USA at age grade level and became the youngest player to represent the Eagles at senior level when he featured in the non-capped match against Munster in Connecticut in August 2008.