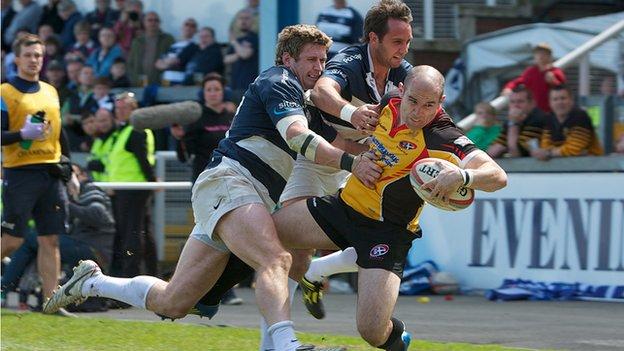 The play-off system in the Championship is to be revamped from next season.

The Rugby Football Union confirmed to BBC Sport that promotion and relegation pool stages are to be abolished.

Instead, the top four clubs will compete over a two-legged semi-final and onto a two-legged final while the side finishing bottom will automatically drop to National One.

The system is intended to streamline the league and reward the best teams throughout the regular season.

Since its inception in 2009, the Championship's top eight clubs were split into two pool groups, while the bottom four clubs formed a separate relegation play-off.

This format was adopted to increase revenue, as every club would end up playing an extra two home ties after the regular season had finished, and it is thought that these additional games will now be filtered into the British and Irish Cup fixtures.

The current system has received widespread criticism, especially from the best performing clubs, as their push for promotion was based on their performances after 22 rounds had concluded.

Bristol have particularly suffered under the format.

The former Premiership club were tasked with negotiating the inaugural play-offs but after finishing the regular season on top they lost in the play-off final to Exeter.

This change from the RFU is a common sense reaction to increasing pressure from many of the clubs in Championship, not just the top ones.

The fact that it mirrors the Premiership is no coincidence.

The reality was the previous system created many meaningless fixtures throughout the season and it is worth noting the finalists have always come from the top four.

The West Country club topped the Championship table again this year but had to play an extra six games to reach the semi-finals, which they eventually lost to Cornish Pirates.

"We had a mad 10 minutes in Penzance and our whole season fell apart," Bristol chairman Chris Booy told BBC Points West. "We've got the system changed and I was one of the main lobbyists for that.

"I think it will prepare us better because we can manage our squad to be in peak condition for the semis and the final.