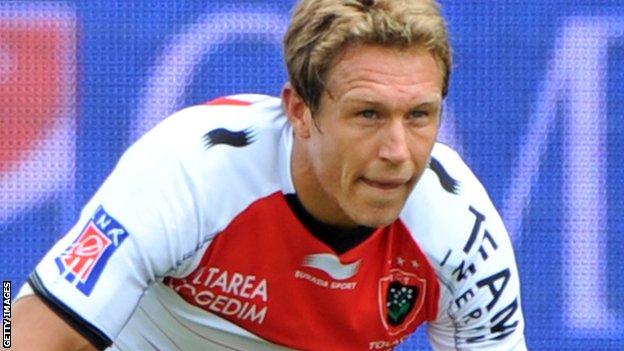 Biarritz, who finished ninth in the Top 14, need to win to qualify for the Heineken Cup for a 13th straight year.

But a star-studded Toulon are desperate to win a first trophy in 20 years.

"It is not the Heineken Cup final but it is a huge match for us," ex-England full-back Balshaw, 33, told BBC Sport.

"It could be a gateway for us to get into the Heineken Cup next season. To miss out on that would be very disappointing. Everyone wants to win a piece of silverware, especially after the season we've had in the Top 14."

Biarritz, without figureheads like Imanol Harinordoquy and Dimitri Yachvili on World Cup duty with France, won only one of their first 10 league matches and were bottom of the table at one stage.

A run of six victories in their last eight games belatedly lifted them out of the drop zone to a ninth-placed finish but, for a club crowned French champions three times in the last decade, struggling at the bottom was something of a shock.

"It is not going to solve everything if we win on Friday [at The Stoop], or paper over the cracks," said Balshaw, who will spend a fourth year in Biarritz next season.

"Everyone has been disappointed with the way the season has gone. We don't want to make excuses about players being away during the World Cup, but it does make a difference. But that is in the past now, we are fully focused on winning a trophy.

"We know it is going to be tough with the calibre of players they have got, but we have put some performances together over the last five or six weeks and we know when we get our own game right, we can compete with every team."

Having lost two Heineken Cup finals - to Munster in Cardiff in 2006 and Toulouse in 2010 - Biarritz are desperate to put a European trophy in their cabinet and extend their participation in the elite tournament.

But Toulon have their own motivation. Two years ago, they too suffered the misery of losing a European final, to Cardiff Blues in front of 49,000 partisan fans in Marseille's Stade Velodrome.

They have finished third in the regular Top 14 season and will face Racing Metro in the play-offs, with Toulouse awaiting the winners in the semi-finals.

But the player who has shone brightest of all lately is former London Irish flanker Steffon Armitage, who has been named the Top 14 Player of the Season after his first year on the Cote d'Azur.

Armitage won the last of his five England caps in the 2010 Six Nations but, despite his outstanding form, he missed out on a place in England's tour squad to South Africa.

"I'm not ripping my hair out over it for the simple reason that all my energies are devoted to helping Toulon," said the 26-year-old. "The set-up here is fantastic and the fans are brilliant; more like a football club. I have no regrets about moving here."

Also starting on Friday will be former Saracens lock Kris Chesney, and 20-stone-plus Wales prop Eifion Lewis-Roberts, while the replacements include former Bristol back-rower Joe El Abd and lock Dean Schofield, who won the Challenge Cup with Sale in 2005.

Wilkinson, as one of the beneficiaries of colourful president Mourad Boudjellal's time in charge, is under more pressure than most to bring some return on the millions of euros shelled out in pursuit of success.

Wales prop Gethin Jenkins and England internationals Andrew Sheridan, Delon Armitage and Nick Kennedy are among those swelling the ranks next season.

"The French Championship-winning team of 1992 is still revered here in Toulon. The date of the final, and the players, are all recalled with huge affection," said Wilkinson, who played in three Challenge Cup semi-final defeats with Newcastle, as well as Toulon's final defeat two years ago.

"It would be nice at this stage of my career to help deliver a title to Toulon and be remembered in the same way. If you want to make your mark as a team you have to be the best, otherwise it simply doesn't count."