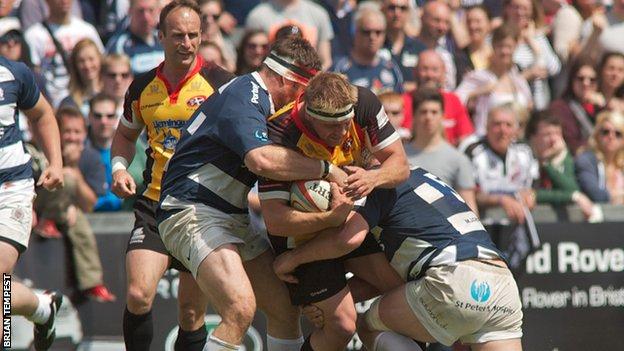 English rugby's second tier will get rid of its promotion and relegation pool stages after the end of the regular season.

The top four teams will play off for promotion to the Premiership with the bottom side relegated to National One.

"It's positive because it means the first stage games are more meaningful," Davies told BBC Sport.

"But at the same time we're quite disappointed because we seem to have got peaking for this format down to tee," he added.

The Pirates lost last year's play-off final to Worcester but beat Bristol over two legs earlier this month to set up a two-legged meeting with London Welsh for the right to win the 2012 title.

"The fear of the relegation pool was a massive contributing factor to people picking up players in January as once you were in the top eight you were safe from relegation.

"I think it will mean you'll have less people coming into clubs during the season as a result."

But Davies also fears that it may have implications for young players trying to break into the sport.

"We will rotate less so it will mean there will be less opportunities for young players coming through.

"We never go out not to win a game, but you try and give as many players as much exposure as you can get.

"Our squad's depth is quite strong, but other teams might not want to risk putting a younger player in if they don't have that safety net of the play-off pool."