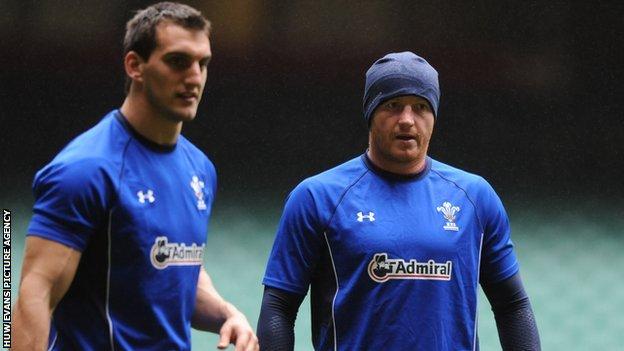 Openside flanker Martyn Williams deserves a better career send-off than he experienced for Cardiff Blues, according to Sam Warburton.

Flanker Williams, 36, will win his 100th Wales cap against the Barbarians on Saturday, 2 June.

Wales captain and Blues man Warburton said: "I was disappointed, to be honest, with the last game at the Blues when there was only about 3,000 there.

"And for a player like Martyn, you think he deserves a better send-off."

Williams' final game for the Blues came in the Pro12 League at Cardiff City Stadium on Sunday, 22 April when they beat Edinburgh 38-13 in front of an official 3,580 attendance.

That crowd figure and other disappointing support at the home of Cardiff City Football Club prompted the Blues to return to Cardiff Arms Park for regular fixtures from next season.

But Warburton hopes Wales' fans can at least turn up in enough numbers for the Barbarians visit to give Williams "his just reward".

And the player who Williams helped nurture at the Blues also believes the former Pontypridd player would rue missing out on a century of Wales caps if the opportunity had not arisen.

"[It's] brilliant for him, yeah. He does really deserve that 100th cap and it would have haunted him for the rest of his life," said Warburton.

"He might not admit that, but I think he'd desperately want it. So I'm really chuffed for him that he's got that [coming]."

Williams was on the winning side when Wales met the Barbarians in 2011 as the invitation club to a dramatic 31-28 win over his own nation.

That was Williams' only match at that level since Wales' November 2010 Tests and was followed by a 99th cap against Argentina in August 2011 as Wales completed their build-up for the 2011 World Cup.

He was left out of the tournament squad and failed to win favour for the 2012 Six Nations in which Warburton's injury paved the way for Osprey Justin Tipuric to make his mark.

When Tipuric was also injured during the Six Nations, Scarlet Aaron Shingler made his debut at openside having built his reputation elsewhere in the back-five.

Those openside preferences have left Williams on the sidelines for their last 13 Tests.

Earlier in his career he was overlooked in favour of Brett Sinkinson, a New Zealander who won 20 caps while playing for Neath.

Sinkinson won 15 of those caps before being ruled ineligible for Wales amid the Grannygate scandal that broke in 2000, and five more after he later qualified for Wales on residency grounds.

If, as is likely, facing the Barbarians is Williams' Test swan song, he will bow out against long-time Wales team-mates Shane Williams, Stephen Jones and Duncan Jones.

However, former Cardiff RFC and Pontypridd flanker Williams is also on standby for the Australia series.

With only seven days in between facing the Barbarians at the Millennium Stadium and taking on the Wallabies, Wales send a 15-strong advance party down under to acclimatise for the tour opener in Brisbane.

Warburton is expected to be among the advance guard as he continues to recover from the shoulder injury that ruled him out of the latter stages of Wales' 2012 Six Nations Grand Slam campaign.