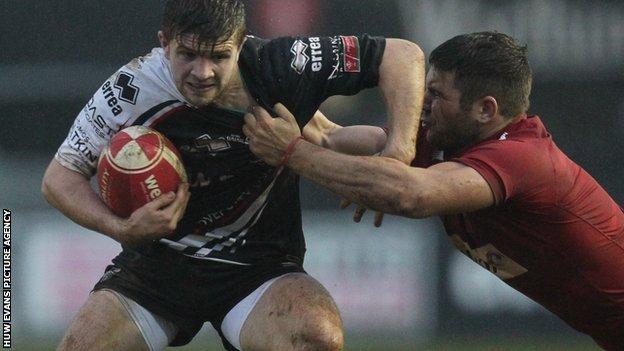 Pontypridd have been crowned Premiership champions following a tight 15-13 victory over Llanelli in the play-off final.

At a rain-soaked Sardis Road Lewis Williams was the home side's hero with five successful penalties.

Craig Price scored the game's only try for Llanelli in the second half while Jordan Williams contributed eight points.

Ponty had finished the regular season top of the Premiership table, two points ahead of second placed Llanelli.

The home side secured the game's first points after six minutes with fly-half Lewis Williams successful with a penalty.

Pontypridd dominated the opening 15 minutes of the game and Williams added a second penalty to extend his side's lead to six points.

Within two minutes Llanelli were given the chance to close the gap when they were awarded a penalty but Jordan Williams pulled his kick wide of the right post.

Ponty's Williams maintained his 100 per cent kicking record when he added a third penalty to extend Pontypridd's lead to nine points.

Llanelli finally got on the scoresheet seven minutes before the interval when Jordan Williams made amends for his earlier miss with a successful penalty.

But another Williams effort hit the post and the home side held on to a 9-3 interval lead.

Lewis Williams added a further three points to the home side's total to make It 12-3 early in the second half.

But the Scarlets hit back amid difficult playing conditions and number eight Price crossed in the corner for the game's opening try.

Jordan Williams added the conversion and Llanelli has closed the gap to two points with 20 minutes of the game remaining.

Namesake Lewis Williams opened up a five point cushion when he succeeded with his fifth penalty of the evening.

Llanelli's Williams hit back with a successful penalty to reduce the gap once again to two points as the game entered its final stages.

Pontypridd played out the final minutes of the game with 14 men after Gary Williams was sent-off for a dangerous tackle but Dale McIntosh's side held out for the victory and the Premiership title.