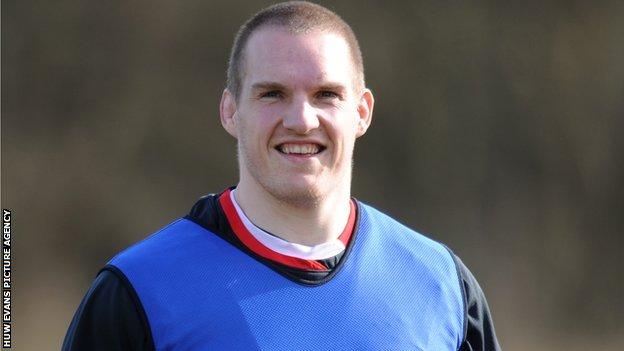 Gethin Jenkins' move from Cardiff Blues to Toulon has been confirmed by the French Top 14 side.

The announcement came as Toulon prepared for their Amlin Challenge Cup final against Biarritz at the Twickenham Stoop.

Jenkins, 31, revealed his departure in March and will join at the same time as ex-England prop Andrew Sheridan.

Sheridan joins from Sale with another Welshman, Eifion Lewis-Roberts, heading in the opposite direction.

Loosehead prop Jenkins signalled a possible move in November 2011 and opted for the French club instead of taking up an offer from Bath.

He said: "At Bath, I would have stayed closer to home but honestly, I wanted to set a new challenge. Toulon gives me the opportunity of a new stage in my career and I intend to enjoy it."

He also heads to Stade Felix-Mayol having helped the Blues to the Amlin Challenge Cup against his new club in 2010.

"That was one of my best moments of my career with Cardiff Blues," said Jenkins.

"I was very impressed by the number of fans from Toulon and the atmosphere they created.

"It's really very exciting to play for those fans."

After making his name at Treorchy and Pontypridd, he spent a season at Celtic Warriors whose 2004 demise prompted a move to the Blues.

Jenkins went on to tour with the British and Irish Lions in 2005 and 2009, making five Test appearances.

In 87 Wales caps, the first of which came against Romania in November, 2002, Jenkins has won a record-equalling three Grand Slams.

He is among six Welsh internationals to have left the Blues since the season's end.

In addition, the Blues lost Gavin Henson to dismissal and hooker Gareth Williams to injury-enforced retirement during the season.