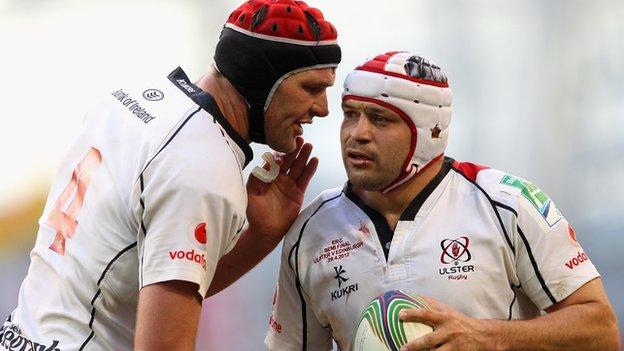 Hooker Rory Best insists Ulster have no interest in playing the role of "brave losers" in Saturday's Heineken Cup final against Leinster.

Leinster are aiming for a record-breaking third title in four years, but Best says his side are "in a good place" to win their second crown.

"We are in this final to win it," Best said. "It means more to all our players than any other game.

"It is not just about putting on a brave display, it is about winning."

Leinster, with talisman Brian O'Driscoll and in-form full-back Rob Kearney declared fit to start, start short-priced favourites at Twickenham to become only the second team in Heineken Cup history, after Leicester in 2001-2002, to win back-to-back titles.

But having emerged from a group including the Tigers and Clermont Auvergne, won at Munster's Thomond Park fortress in the quarter-finals, and come through an edgy semi-final against Edinburgh, Ulster are intent on seizing the opportunity to make their own history.

"This why we play rugby, for these massive games," added Best. "You need to embrace every second of that because it doesn't last forever. We have great belief when you look at the calibre of players in our squad. We fully deserve to be here. We are a good team and we just need to show that."

While scrum-half Ruan Pienaar - one of four former Springboks in the Ulster side including skipper Johann Muller, number eight Pedrie Wannenburg and full-back Stefan Terblanche - and All Blacks prop John Afoa have all been influential, the local core of the Ulster side has evolved together.

"Chris Henry hasn't received anything like the attention he deserves. He is a hugely under-rated player and should be closer to the Ireland scene. Sean O'Brien is going to be very much occupied by Henry. Sean has not got the physical stature of Stephen Ferris, he is not the same wrecking ball. If he tries to out-Ferris Ferris, then he is going to lose the battle with Henry. (In the modern game you need a seven who is very clear in his role, who gets in the way of everything and puts their focus on the ball on the ground. It is difficult for Sean. Sometimes he is caught between two stools."

The likes of Best, powerhouse flanker Stephen Ferris, wings Andrew Trimble and Craig Gilroy, centres Darren Cave and Paddy Wallace, prop Tom Court, lock Dan Tuohy and flanker Chris Henry have matured over the past three years under coach Brian McLaughlin, who was informed mid-season that he would be replaced by New Zealand Under-20s coach Mark Anscombe next year.

If Best alluded to the extra motivation Ulster's players may carry to give their coach an appropriate send-off before he is moved aside to run the province's academy - "this season has made us even closer as a team," said the hooker - McLaughlin was keen to distance his position from the equation.

"This is all about Ulster Rugby showing how far we have travelled over the last three years," he said. "I have no doubt these guys will go on that pitch and show everyone what a quality team they are."

While Ulster have surpassed expectations already, Leinster have continued to garner plaudits for the manner in which they have reached their third final in four years.

History beckons for the Dubliners, who could join Toulouse as the only other side to win the Heineken Cup more than twice, and the only one to win it three times in the space of four years.

Coach Joe Schmidt acknowledged that with the injuries to O'Driscoll and Kearney and a variety of "bumps and bruises" afflicting several other players, preparations have been far from ideal.

The New Zealander was happy to acknowledge the threat Ulster pose to his multi-talented team. "The wins they have stacked up in this competition would be enough to make anyone concerned," he said.

But with fly-half Jonathan Sexton and O'Driscoll directing operations and game-breakers like Cian Healy, Sean O'Brien and Jamie Heaslip in the pack, Leinster's greater experience of these occasions - particular the manner of their astonishing comeback in last year's final - may provide the key to victory.

"The team that keeps their patience and keeps their cool should win," added Schmidt. "The occasion can sometimes dominate the performance. It is important we stay very much grounded and process-orientated, and not get carried away with the occasion."

With Twickenham sold out, it is expected to be the largest ever crowd for a Heineken Cup final, surpassing the 81,076 that witnessed the all-English final between Wasps and Leicester at the stadium in 2007.

Leo Cullen was on the losing side that day, but the Leinster captain now stands on the verge of being the first man to lift the Heineken Cup three times.

"When you experience success, it makes you a bit greedy for more, and you just want to experience those feelings again," said the lock, at 34 the "junior" partner in the second row.

Alongside him on Saturday, 37-year-old All Black Brad Thorn will become the oldest player to feature in a Heineken Cup final, and could become the first in history to have World Cup, Super 15 and Heineken Cup winner on his CV.