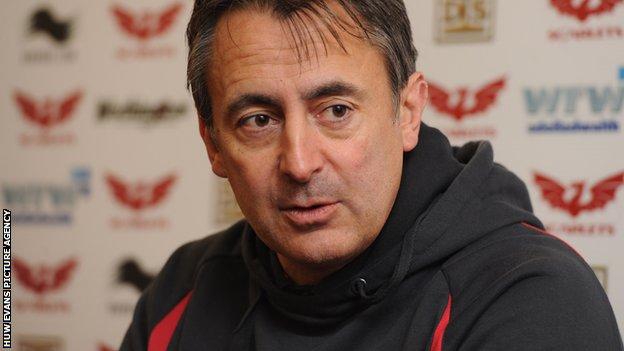 Scarlets president Phil Bennett has said it would be a huge blow if coach Nigel Davies leaves to join Gloucester.

Davies is believed to be on Gloucester's four man shortlist following the departure of Bryan Redpath in April.

"I think it would be a massive blow because he is a quality coach," he said.

"Nigel's come a long way. He's rebuilt the club after a dreadful couple of seasons.

"We've not won a lot of things and I think Nigel said at the start of the season it's about time we grew up, we're not youngsters anymore and we have to win things.

I think in Gloucester it's a sleeping giant. We all know it's a rugby mad town. They've badly under achieved this season

"This season they did very well in Europe but finishing outside the [Pro12] top four, I'm sure Nigel would have been very disappointed.

"What's a little bit baffling for me is that Nigel, along with possibly the chief executive and the board members, have let five or six of the top notch forwards go.

"Nigel was saying 'I have to rebuild, I have to get a top front five to compete with the best and to win trophies.'

"If he is to leave it leaves a huge task for the man following him to find those five or six forwards."

Davies, a former Wales centre, has been in charge of the Scarlets since May 2008 following the sacking of director of rugby Phil Davies.

Previously Davies was the Welsh Rugby Union's head of rugby development and was also assistant Wales coach to Gareth Jenkins from 2006 to 2007.

Following the dismissal of Jenkins after Wales' dismal performance at the 2007 World Cup, Davies took charge of the national team on an interim basis for a Test against South Africa.

English Premiership side Gloucester have been seeking a new head coach since April, following the departure of Redpath, who has been heavily linked with a return to Sale.

The Kingsholm club have insisted they will begin a "legal attack" against Sale if they discover an approach from the Sharks was behind Redpath's exit.

And Bennett is not surprised Davies is among the candidates being considered by Gloucester to succeed Redpath.

"I think in Gloucester it's a sleeping giant," added Bennett. "We all know it's a rugby mad town. They've badly under achieved this season.

"What they see in Nigel Davies is a man who plays attractive football, the way the Scarlets have always wanted to play it.

"And he's had a bit of experience with the Welsh team when he was along there with Gareth Jenkins.

"I think they see this man as somebody who could rekindle the spirit of Gloucester and turn them into a side who should be challenging each year in the Heineken Cup and certainly for the [Premiership] play-off places."